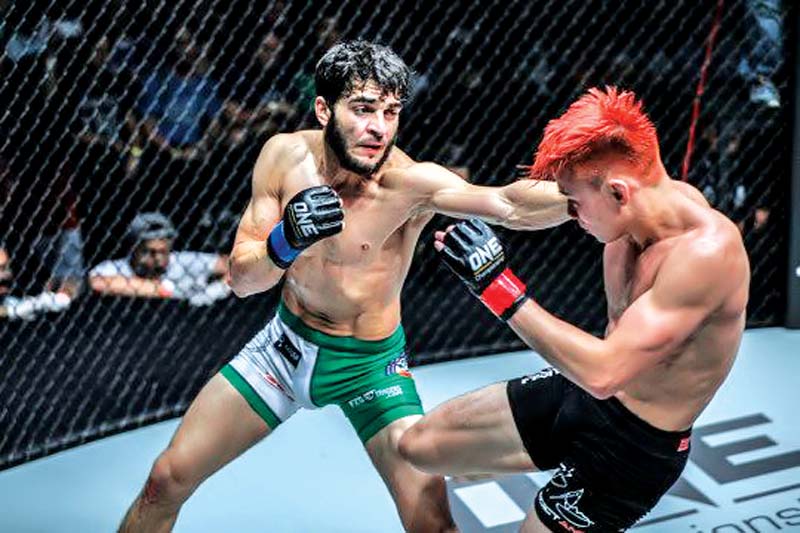 Like the seven opponents before him, Benedict Ang was no match for Mujtaba’s deft combination of speed and power. PHOTO COURTESY: ONE CHAMPIONSHIP

Like the seven opponents before him, Ang was no match for the Quetta-born’s deft combination of speed and power.

The 23-year-old Mujtaba was the busier and more aggressive of the two fighters over three rounds, leaving the judges with an easy decision to make.

His coach Ehtisham Karim, who runs Islamabad’s famed Fight Fortress gym with brothers Sultan and Uloomi, congratulated the entire Pakistan nation and talked about Mujtaba’s strategy for the fight.

“Ahmed has a reputation for being a submission artist so he wanted to test himself and prove to the sceptics that he is more than that. This is why he stood and battered Ang for the majority of the fight,” said Ehtisham.

Before the fight Mujtaba had talked of his disappointment at being ignored by his countrymen and at them turning a deaf ear to his achievements. At one point he had even threatened to leave the country if he doesn’t soon get the recognition he deserves.

Ehtisham, however, feels those comments were made out of frustration. He revealed that Mujtaba wants to grow the sport in Pakistan so much that he even refused the offer to train with a well-known Thailand gym in favour of staying at Fight Fortress.

He did though pour cold water on Mujtaba’s hopes of getting some help or recognition from the government. “Mujtaba will soon stop asking for government’s help as it has time and time again proven to be a futile activity. It’s just the way things are in our country.”

Ehtisham said the sky is the limit for Mujtaba and promised that in case no one steps forward to help out the World Series of Fighting Global Championship (WSOFGC) featherweight champion, Fight Fortress will bear his expenses and send him abroad.

“We will not let such a great talent go to waste like so many others before him have,” declared Ehtisham.

“I’m extremely happy as Mujtaba not only won on his One Championship debut, he also kept his undefeated streak intact. Congratulations to Pakistan,” said Uloomi, who had made similar headlines in September when he defeated India’s Yadwinder Singh at the WSOFGC in Manila, Philippines.