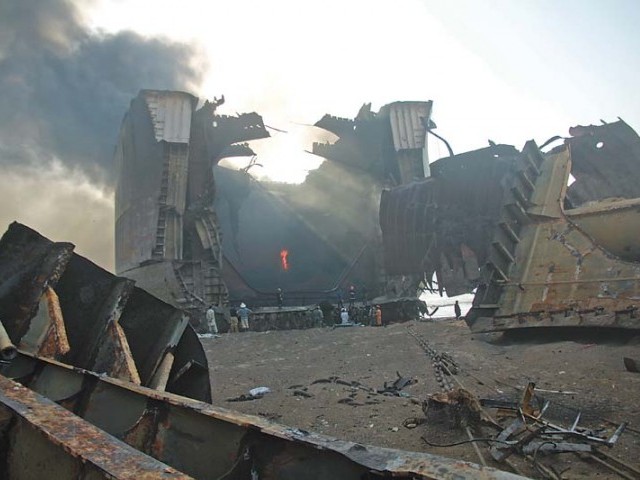 About 25 people were killed and several others were injured when a fire erupted in a ship at Gadani ship-breaking yard on November 1. PHOTO: FILE

KARACHI: A judicial commission should be constituted under a Sindh High Court judge to investigate the deadly oil tanker blast that cause more than 25 deaths at the Gadani ship-breaking yard, demanded workers on Sunday. The ship owner, contractors and heads of government watchdog institutions should be arrested and tried for their negligence towards the labourers lives and environment, said protesters during a demonstration rally carried out from Regal Chowk to Karachi Press Club.

The ship-breaking workers urged the government and their employers to compensate each of their dead comrades with Rs3 million as financial support for their families and give Rs500,000 to each of the injured workers. They also stressed the need for the authorities to expedite the search operation for the workers who have been missing since the incident, implement labour laws and ensure health and safety of workers.

Around 25 workers were killed and more than 70 injured when a blast ripped through the decommissioned Japanese-made MT Aces oil tanker moored at plot no 54 for dismantling at Gadani ship-breaking yard on November 1. A fire engulfed the entire 24,000-ton vessel soon after the first blast, trapping workers inside it. The fire engulfed the ship for four days, causing people to lose hope that those inside would be able to be rescued. More than 100 workers were reportedly on board the ship when the incident occurred. A number of them are still missing.

The rally was organised by the National Trade Union Federation (NTUF) in collaboration with Ship-breaking Mazdoor Union (SMU). NTUF president Rafiq Baloch and SMU president Bashir Mehmoodani led the demonstration where a large number of ship-breaking workers, relatives of the missing workers, home-based female workers, as well as heirs of the victims of Baldia factory fire and the victims themselves attended.

The labour leaders speaking on the occasion said that around 800 workers have lost their lives and more than 1,000 have lost their limbs or suffered serious injuries in accidents at Gadani ship-breaking yard since 1968. This is perhaps the worst workplace in the world, definitely in Pakistan, where casualties in such a large number have occurred during work and the government watchdogs, such as the labour department, social security institution, environment protection agency, Employees Old-age Benefit Institution, police, local administration, decommissioned ship owners and contractors are responsible for these deaths and injuries, they claimed.

The owners and contractors, in collusion with the watchdogs, have imposed a jungle-law at the ship-breaking yard by violating the constitutional and legal rights of the labourers and overlooking international treaties, conventions and agreements on the subject, the demonstrators lamented. Giving examples of India and Turkey, they said that special laws for health and safety have been passed and their implementation have been ensured by these governments, due to which the casualty ratio in accidents has considerably declined.

They said that Pakistan takes pride in calling itself a ‘nuclear state’ but the darker side of this situation is that our institutions are not even capable of fighting a fire to save lives. The ship-breaking industry gives billion rupees in taxes but gets nothing in return, the protesters lamented. In the oil tanker blast, the government departments chose to gaze at the flames instead of working to put them out, letting the workers trapped inside burn, the workers said. Another protest was held on Sunday at Lasbella Press Club in Gadani on Sunday by the United Labour Forum and Progressive Youth Alliance.

The protesters demanded Rs2.5 million for the labourers who lost their lives in the incident together with the abolishment of contractual employment system and social security for the workers.

Art exhibition: Beyond the binary at Canvas Gallery