Living on the edge:Wheeling and dealing with danger

Living on the edge:Wheeling and dealing with danger 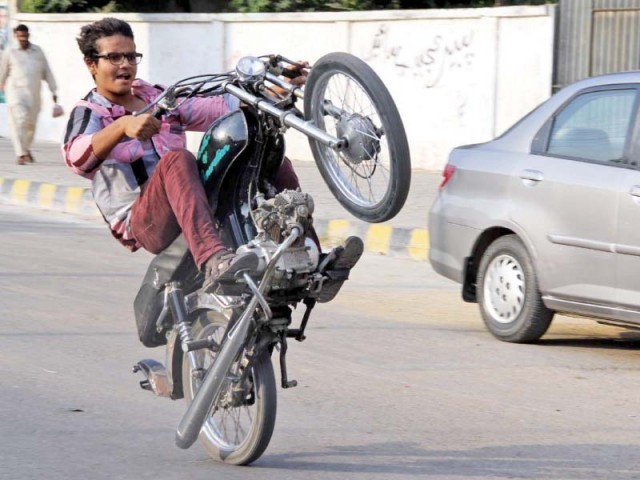 LAHORE: For young motorcyclists in Lahore, wheeling is a game of pride. But the dangerous stunts come with some brutal rules as well like not looking back when a group member meets an accident.

Not many realise the extent of viciousness they get used to by being involved in the activity. However, some come to their senses when either they or someone close to them is affected.

Ashi*, a biker, tells The Express Tribune that he used to follow the rules while doing stunts on his motorcycle until one day he had to break them when his close friend met an accident.

“We had reached Naseerabad, when one of the bikers in our group lost control and was critically injured,” he recalls. “The group stopped to take a look back but went ahead without helping him.”

Ashi, however, turned back and called Rescue 1122 for help. He stopped because Vikki* was a close friend.

The injured boy, bleeding profusely, was taken to Lahore General Hospital. Bones of his arms and legs were all broken. He was shifted to the intensive care unit and then to the operation theatre. Vikki went into comma and has not regained consciousness since then.

Ashi recalls he called Vikki’s family at the hospital, where the Model Town CIA police also reached the site and took all the group members into custody, but freed Ashi due to intervention by a political figure.

He adds Vikki went into comma and has not returned to consciousness since then.

Besides requiring to not stop, one-wheelers also do not stop when a cop attempts to intercept them, or when the traffic light is red, Ashi says.

The 24-year-old young man, Ashi, says he started one-wheeling when he was 16 years old. He believes the youth is motivated also because the game helps them form a hero-like image “in front of girls”.

As road accidents are inevitable due to one-wheeling, Ashi believes those who want to be in the game should be provided a piece of land by the government.

Another one-wheeler, Asif*, a resident of Harbanspura, tells The Express Tribune that the youth also look forward to getting favours from those whom they help learn the stunt. “The learners pamper their teachers by buying them branded clothes, shoes and taking them out to dine at restaurants of their choice,” he says.

However, he adds, in the group of 30, there were only two people who would do one-wheeling while the others were spectators. “Now, majority of them are wheelers,” he said. “Criminals have also joined the game.”

Criminals often learn stunts and tricks of bike-riding from wheelers and join their group, but instead of only being part of the game, they use the bike-riding skills to rob people on the roads and in streets, says Ashi.

The police officials confirm this, saying they have caught members of gangs that would rob people. The claim Lahore police has launched crackdown against one-wheeling and whenever a one-wheeler was apprehended he was handed over to the CIA wing for investigations. However, according to wheelers, police officials often supervise the game.

Moreover, they said, whenever a wheeler was apprehended he would offer bribe to the police official.

Besides, wheelers moved in groups of 100, 150 or 200 and some boys carried guns with them. They often go out late at night when comparatively low number of police personnel are on patrol or duty and get frightened on seeing a large number of wheelers herded together. There have been many instances in which constables were beaten another wheeler says.

The impact of police intervention also fails when the wheeler they arrest turns out to be from or having contacts with an influential family.

According to data compiled by Rescue 1122, 35,116 accidents were reported in Lahore till October 5. Out of which, 19,880 were bike related accidents. Nevertheless, youth continue to go around doing stunts on their bikes.

However, spokesperson of the city traffic police said they have launched crackdown against one-wheelers and were registering criminal cases against them. He added more than 3,000 FIRs have been registered against them so far in 2016 at various police stations of the city.

Besides, a special force, Anti-One Wheeling Squad, has been established. It comprises two inspectors, 134 wardens and patrolling officers. They have been provided special heavy bikes and video cameras.

Dr Asir Ajmal, a professor of psychology at Government College University Lahore says wheelers are often teenagers. He adds at that stage a boy is usually concerned about impressing peers, onlookers and girls. He says this referring to the centuries old tradition followed by hunting tribes in which a boy had to perform a challenging task to prove he has become a man. “By one-wheeling, a teenager tries to prove to his peers and onlookers his manliness.

(*Names of bikers have been changed