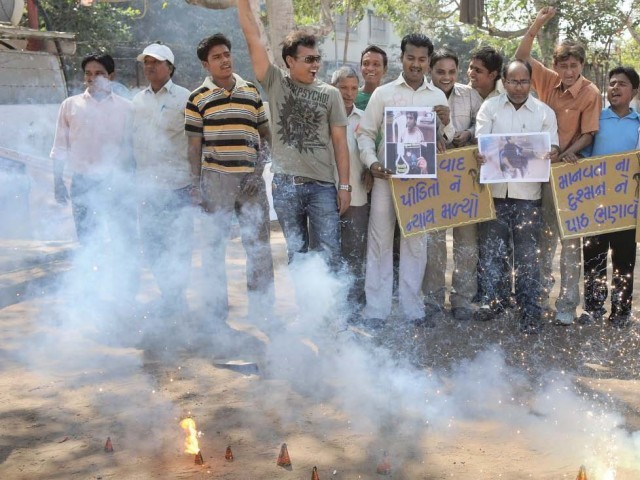 NEW DEHLI: The Bombay High Court on Monday confirmed the death sentence of Ajmal Kasab for waging war against India with the 26/11 attacks in Mumbai in 2008.

The court also held him responsible for the killing of senior police officials including Hemant Karkare, the Anti-Terrorism Squad (ATS) chief,  who was shot outside Cama Hospital along with Additional Commissioner of Police (ACP) Ashok Kamte and encounter specialist Vijay Salaskar.

“There is no scope of reform or rehabilitation of the convicted accused. This is rarest of rare matter so he should face capital punishment. The court cannot be more confident than it is today that death penalty must be given. Kasab and Abu Ismail together killed 56 people,” the two-judge division bench comprising justices Ranjana Desai and RV More observed, while dismissing an appeal filed by Kasab challenging the death sentence by Special Judge ML Tahaliyani in May 2010.”

Kasab attacked the sovereignty of the government to “destabilise India and its economy,” said the judges. They said he had a “scheming mind” and was not influenced. His conviction was based on CCTV footage showing him striding across the Chhattrapati Shivaji Terminus with an AK-47 and a backpack.

“Your death sentence is upheld. You can appeal before the Supreme Court,” Justice Desai told a bearded Kasab.

The convict, who has not attended the appeal for security reasons but has been able to follow proceedings via video link, looked at the floor as the judgment was handed down, news channel NDTV said.

“Kasab has never shown any remorse after his arrest and we have observed that even on video conference he has not shown any signs of regret,” the judges added.

Kasab, the only terrorist caught alive during the attacks which killed 166 people, was sentenced to death last year by a trial court in Mumbai for waging war against India. Since his arrest, Kasab has been kept in a special bomb-proof and bullet-proof cell at Mumbai’s Arthur Road Jail.

While upholding Kasab’s death sentence the high court also dismissed Maharashtra Government’s appeal against acquittal of Fahim Ansari and Sabauddin Ahmed in its 1208-page judgement. Fahim and Sabauddin were accused of preparing maps of Mumbai and giving them to alleged Lashkar-e-Taiba operatives. Maharashtra government has decided to appeal against the acquittal of the duo in the Supreme Court.

Kasab’s lawyers had argued that the death sentence should not apply because he is 24 years old. But the judges said: “The diabolical and brutal nature of the crime over-rides the age factor.”

His lawyer, Farhana Shah, said that her client still has a chance and is likely to appeal in the Supreme Court against the Bombay High Court’s order which upheld the death sentence. “We will go through the judgement and then suggest Kasab on the next course of legal action. It is up to Kasab to decide,” said Shah.

Under Indian law, death sentence cases have to be referred to the local state high court. The judges can uphold the sentence, reduce it, order a retrial or overturn the conviction.

If Kasab appeals to the Supreme Court and it (appeal) is rejected, as a last resort he can appeal to India’s president for clemency. WITH ADDITIONAL INPUT FROM AFP