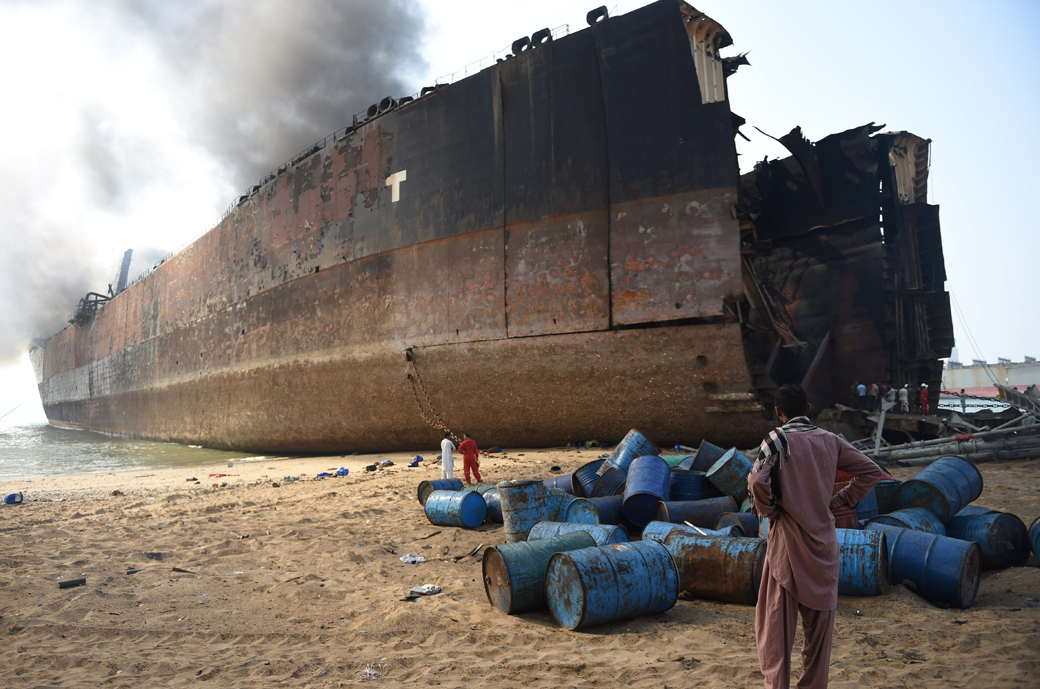 A man looks at the wreckage of a burning ship a day after a gas cylinder explosion at the Gadani shipbreaking yard on November 2, 2016. PHOTO: AFP

KARACHI: Rescue workers have spotted three to four bodies lying on the deck of a burning tanker on Thursday as firefighters continued their battle to put out the blaze following a series of explosions aboard the vessel on November 1 at the Gadani ship-breaking yard.

“Some three to four burnt corpses were seen by the rescuers as they managed to climb up the ship in a bid to determine the situation inside the burning vessel,” Saad, grandson of the late philanthropist Abdul Sattar Edhi, told The Express Tribune.

More than 100 people who were reportedly inside the 1995-built tanker Aces at the time of the explosion are unaccounted for.

Eighteen-year-old Saad, who has taken part in the rescue operation since day one, explained that rescuers from the Edhi Foundation and the fire-brigade department, however, could not fetch the bodies down to the ground because of metal sheets that were too hot to stand on.

Rescuers were finding it difficult to carry out their work on the deck in the rear from where flames were leaping into the air, he said.

Meanwhile, workers continued their strike over the tragic incident which is seen as the worst disaster in the history of Gadani ship-breaking yard.

In their meeting with the workers’ representatives, Minister for Ports and Shipping Mir Hasil Khan Bizenjo and Balochistan Labour Secretary Dr Kahoor Khan Baloch pledged to conduct an inquiry into the oil tanker blast and hold those responsible accountable.

National Trade Union Federation deputy general-secretary Nasir Mansoor said the federal minister told them that he had ‘strictly’ asked the police to arrest ship-breakers association chairman Deewan Rizwan and the owner of the plot where the incident occurred, Chaudhry Abdul Ghafoor, and investigate the matter for their alleged negligence towards workers’ safety.

So far, 19 people are confirmed dead while over 50 others are injured.