"All the best to the thousa­nds of wonder­ful friend­s"
By Agencies
Published: May 10, 2010
Tweet Email 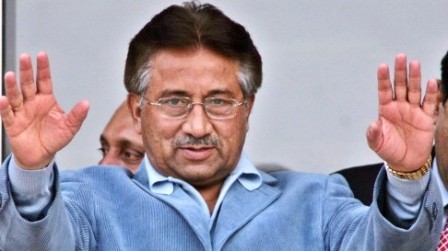 Former President Musharraf could face trial if he returns to Pakistan. (AFP)

Former president Pervez Musharraf has said that he has 200,000 fans on the social networking site Facebook, and they want him to return to Pakistan.

In a recent video message addressed to the members of his newly established party – the All-Pakistan Muslim League (APML), Musharraf said he believed Pakistan has the potential to progress as a developed and prosperous country, and he promised not to let down his fans.

Earlier, Musharraf also lauded his supporters for attempting to hold a pro-Musharraf rally in Islamabad, which he alleged was postponed due to government pressure.

“All the best to the thousands of wonderful friends from around the world that were coming together on 8th May in Islamabad to show their support for me. As the event has been postponed due to government pressure, my public address shall be posted for all to see on mass media at once. This must not break our resolve in any manner to serve Pakistan and I look forward to seeing you all in Pakistan soon. Pakistan First!”