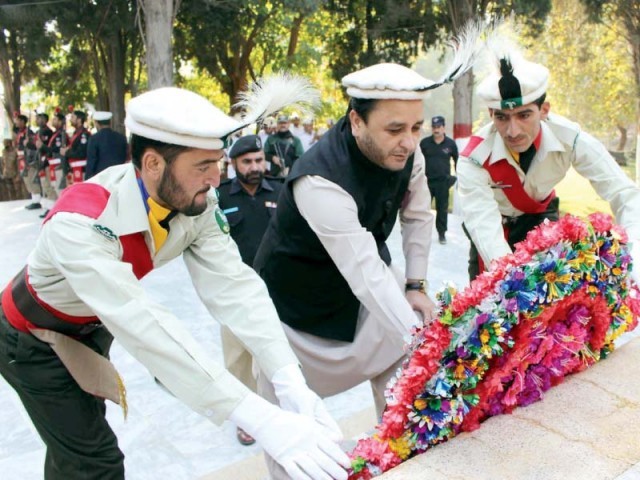 GILGIT: Gilgit-Baltistan (G-B) marked its 69th Independence Day on Tuesday with the occasion celebrated throughout the region.

Political leaders and locals pledged to safeguard the country and the region from internal and external threats.

The main ceremony to mark the day was held at the historic Chinar Bagh where G-B Chief Minister Hafeezur Rehman and force commander FCNA Major General Saqib Mehmood hoisted the flag. Later, they laid floral wreaths on the graves of those who had lost their lives fighting the Dogra occupiers and Indian Army to liberate Gilgit-Baltistan.

“It’s a day to reaffirm our resolve and work towards the welfare of the country,” the chief minister said while addressing the ceremony.

“Our forefathers liberated G-B and we are all ready to sacrifice our lives for the sake of the country.”

In a separate message, Minister for Kashmir Affairs and Gilgit-Baltistan Chaudhry Barjees Tahir congratulated the people. He said their valiant struggle against Dogra rule had liberated G-B
in 1947.

The day was also marked elsewhere in the region, including Skardu, Ghizer, Hunza-Nagar and Chilas. Another major ceremony was held at the Women’s Degree College Gilgit where students took part in speech competitions and performed tableaus. Rehman also attended this ceremony as the chief guest and distributed prizes at the end.

For the people of G-B, there are two independence days every year. The first is August 14, which is celebrated with the rest of Pakistan. The other is November 1, when they celebrate liberation from Indian occupation.

While there is little confusion about the second independence in G-B, others outside the region are often surprised to learn about this chapter of history.

“We liberated the region on our own and voluntarily joined Pakistan. However, all we got in return was political, constitutional and economic deprivation,” said Imran Ali, a local. He was referring to G-B’s constitutional status which prevented it from getting its due representation in parliament.

“It is really a strange region. People raise their voices to become part of Pakistan and the latter seems reluctant,” said Saqib Ahmed, another resident.

Obaid Abbasi, a writer, says G-B was the only region that offered to be merged with Pakistan after winning a bloody war against the Dogras, while K-P opted to join after a vote. “Sindh, Balochistan and Punjab were part of Pakistan by default.”

G-B’s modern history can be traced back to the 19th century. In 1846, after many wars and bloodshed, Dogras incorporated the region into the princely state of Jammu and Kashmir. The relationship remained intact till 1947 when G-B ousted the Dogras and offered to join Pakistan unconditionally.

PPP questions use of G-B land for CPEC