Nisar hails Imran’s decision to back down from Islamabad ‘lockdown’

Nisar hails Imran’s decision to back down from Islamabad ‘lockdown’ 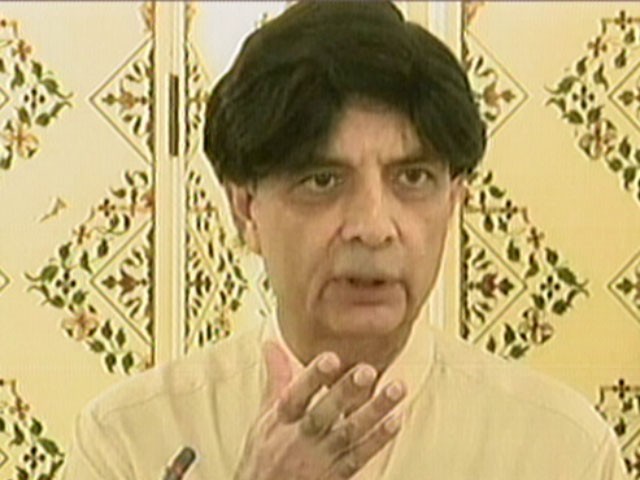 “The development doesn’t mean a victory or defeat for anyone. If it is a victory, it is the victory of the people,” Nisar told reporters in Islamabad on Tuesday. “I call it Pakistan’s victory because Pakistan’s victory is in peace, democracy, rule of law and trust in our [national] institutions.”

Nisar apologised to the “political workers who faced problems due to road blockades”. He, however, justified the government’s action, saying it was done to “prevent Islamabad from turning into a battleground”.

Imran Khan backs down from threat to shut down capital

Nisar praised the country’s courts “for maintaining law and order”. “The courts in the country gave impartial orders which are laudable,” he said. “The postponement of the sit-in will send a good message to international community as Turkish president is also willing to visit Pakistan,” the minister added.

In response to a question on PTI’s celebratory rally on Wednesday, Nisar said permission had so far not been granted in this regard. “I have invited Islamabad and Rawalpindi administration after this presser to decide about the future strategy.”

The administration will also meet PTI leader in view of the court orders, and an official announcement will be made later, he added.

The interior minister also announced to improve the payment and service structure of the Frontier Corps personnel in an attempt to bolster security. “Their salary will be at par with Islamabad Police… a 50% increase will be brought immediately,” he said. He also declared a change in the soldiers’ retirement age to 45.