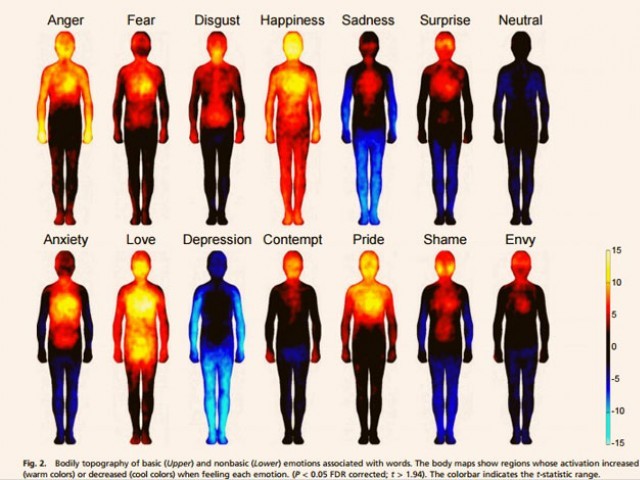 In a study published in the Proceedings of the National Academies of Sciences, the researchers contend that human bodies feel emotions in ‘broadly consistent ways’.

The study asked 773 participants to indicate how some emotionally charged materials made them feel. The participants were shown words, stories, movies, and expressions, and then asked to highlight the areas of the body they could feel decreasing or increasing activity in.

On computer-modeled human silhouettes, participants were told to first colour red where sensations were intense, and then yellow as the feelings got stronger; where the sensations were dulled, they coloured shades of blue.

In the resulting map the silhouette for shame shows bright yellow cheeks, while someone experiencing disgust has a red, roiling stomach. Depression induces a deadening of feeling in the limbs, while sadness is represented by two blotchy eyes drawn on a silhouetted face as the participant is close to tears.

The authors of the study acknowledge that the results of their research could “reflect a purely conceptual association between semantic knowledge of language-based stereotypes” and emotional sensations — such as butterflies in the stomach. However, they argue that their responses suggest a “cultural universality” to how human emotions impact their bodies.

Although the study was conducted with Taiwanese and Finnish participants and their very different cultural backgrounds, both groups drew similar results.

The study concludes ‘that emotional feelings are associated with discrete, yet partially overlapping maps of bodily sensations’ and unraveling the subjective bodily sensations associated with human emotions may help us to better understand mood disorders such as depression and anxiety. Therefore, topographical changes in emotion-triggered sensations in the body can provide a novel biomarker for emotional disorders.

Mukhtaran Mai on her decision to walk the ramp at FPW