Moving south for the winter: The rich move out as the poor freeze in Gilgit-Baltistan

Moving south for the winter: The rich move out as the poor freeze in Gilgit-Baltistan 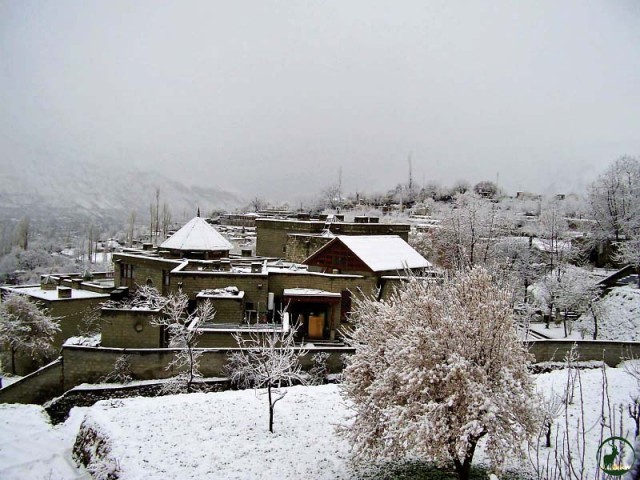 A view of Karimabad town of Hunza during winter. PHOTO: FILE

GILGIT: The wagon door slams into place. The last of the bags have been loaded onto the car and businessman Safdar Khan’s family is ready for the long journey south, out of Gilgit.

But they are not heading out for a vacation.

Despite the fact that it is 2016, people living in the mountainous region of Gilgit-Baltistan still face a miserable time in the winter when temperatures can fall as low as -11 degrees Celsius.

Without reliable gas or electricity supply, people in the region have to burn wood, kerosene or even liquefied petroleum gas (LPG) to keep themselves warm in the chilly nights. But with transport costs rising amid ever rising demand, burning kerosene or LPG to keep one warm can end up burning an even larger hole in one’s pocket.

“Moving out [temporarily] is the best option in winter just because the plain areas are far warmer than ours,” he tells The Express Tribune.

Hence, for the well-to-do in Gilgit-Baltistan, places like Rawalpindi, Islamabad, Lahore, or even as far as Karachi are a viable option. They usually stay there till March, a time when the snow starts thawing and schools start reopening.

With the advent of winter in November, the water in dams starts to freeze leading to a dramatic drop in hydel power production and hence affecting electricity supply. Consumption, on the other hand, peaks as people turn on their electric heaters for warmth.

But the large gap between production and demand ultimately leads to power shortages which can at the worst of times last for more than 20 hours a day between December and April. Meaning that people do not have power when they need it the most to keep them warm.

“Besides lower cost, it is the only way you can keep your room temperature normal. LPG or kerosene oil heaters do not work.”

To keep the fire burning for the entire day to fight off the bitter cold, Noor says he requires around 40 kilogrammes of timber which costs around Rs650. But for many less-fortunate residents of Gilgit, this sum is tantamount to burning money.

“On average, a household of between five and eight members consumes about five to seven tonnes of firewood during the six-month-long winter,” says Noor.

According to a study conducted by the World Wildlife Fund recently, around 99 per cent of G-B’s population uses firewood as main source of domestic energy.

But with forests scarce and the government cracking down on illegal logging, people have to source wood from outside the region meaning that money goes out from the local market and lands in bigger cities, weakening the already fragile local economy.

Arman Ali, who hails from Skardu in G-B, says he migrates to Lahore every winter. What makes Ali’s position unique is that he is not as well-off as Khan. Hence, he spends his migration months in Lahore working rather than lounging waiting for the snow to thaw on the hills.

“In the summer I help my father tending to lands in Skardu. But in freezing cold of winter, I go to Lahore to find a job there,” says the 30-year-old farmer. Working there in a hotel, Ali says he manages to save around Rs30,000 which he can take home to supplement the family income from the farm.

All the other winter hardships aside, life in G-B means spending year-long savings on wood for heating for those who can’t afford to migrate south for the winter.

PAEC to set up cancer hospital in Gilgit