ISLAMABAD: The federal government took $1.8 billion in fresh foreign loans over the past three months including $900 million from commercial banks in an effort to keep foreign currency reserves at historic highs amid growing external debt repayments.

Pakistan’s all-weather friend China also came to its rescue and provided $700 million for 10 days so that the country could meet its external obligations without taking a significant hit on the foreign currency reserves. China Development Bank extended the $700-million loan.

The government borrowed the money from July through September 2016 and a bulk of it – $1.32 billion – came in the last month, according to official documents.

With the fresh borrowing, the total foreign loans that the PML-N government has obtained in its three-year stint have shot up to $26.8 billion.

Of these, $13 billion was spent on the repayment of previous loans while the remaining was added to the debt stock. This did not include the $1 billion the government raised this month by floating an international Sukuk at an interest rate of 5.5%. The debt is ballooning amid warning from the International Monetary Fund about the “high level of public debt”.

Of the $1.8 billion, Pakistan had returned $1.1 billion to the foreign creditors, showed the documents. The net addition to external debt in the last three months was $795 million. 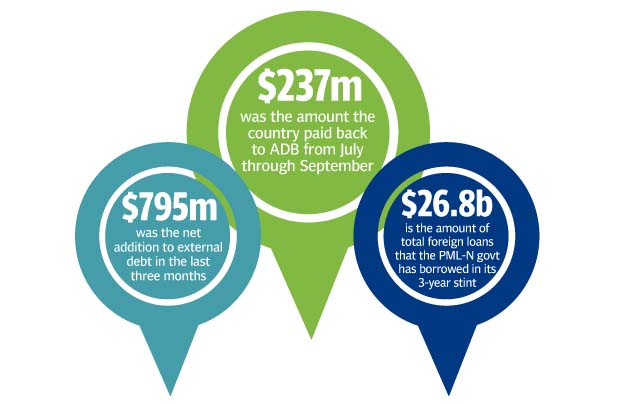 However, the most worrisome aspect was the borrowing of $900 million from the commercial banks. It seems that these non-conventional borrowings have become a norm instead of an exception. Since June 2013, the government has borrowed $2.8 billion from foreign commercial banks.

Unlike international bonds that are issued in a transparent manner, the loans from foreign commercial banks are secretive as they do not allow competitive bids.

Of the $900 million, $200 million was borrowed from UAE-based Noor Bank PJSC and the remaining from China Development Bank.

The much-touted highest-ever foreign currency reserves have largely been built through acquiring expensive foreign loans, which according to independent economists is not a sustainable way to increase the reserves.

Another worrying trend was that net inflows from traditional multilateral creditors like the World Bank and the Asian Development Bank were negative.

The ADB gave $115.8 million in loans but the country paid back $237 million from July through September. Similarly, the World Bank extended $57 million, but the government returned $206 million on account of principal and interest payments.

The main reason behind the negative inflows was the inability of different ministries to timely process the loans and the slow pace of project implementation.