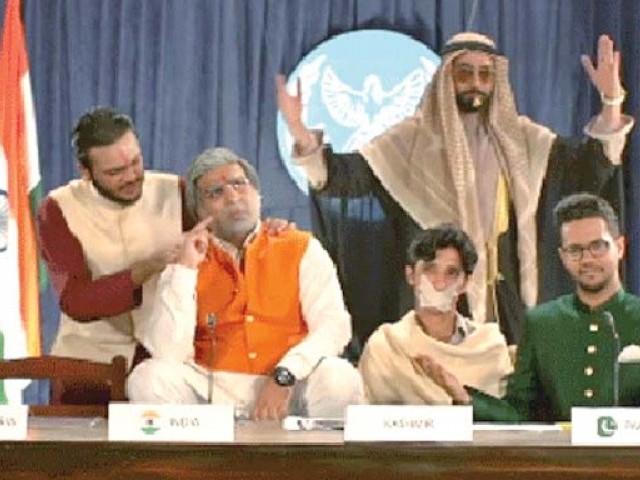 KARACHI: With his penchant for producing eccentric music, singer Ali Gul Pir continues to charm audiences with something new every now and then.

After impressing fans with Chutti Time, the singer has released another quirky song titled Modi Teri .

The visually appealing video has left us in fits. It begins with a breaking news ticker reading: Modi gone mad. As it unfolds, we witness leaders from Saudi Arabia, China, Pakistan, Kashmir and India in a ‘supposed’ UN meeting.

Modi is seen whining about trivial things, including a pigeon he claimed to be a Pakistani spy and complaining about Fawad Khan’s cuteness among other things.

On the other hand, the brutally honest Pir representing a Pakistani leader is seen slamming Modi for the absurd issues he has with Pakistan that lead to tensions between the two countries.

Kashmir is portrayed as a miserable person who is not allowed to speak as India forcefully puts duct tape on his mouth.

Pir has used several signs and symbols to explain the ongoing controversial situation in the video while taking a dig at Modi who he calls ‘brainless’. The song was created in collaboration with electronic music band SomeWhatSuper and the wardrobe was designed by Humayun Alamgir.

Speaking to The Express Tribune ahead of the song’s release, Pir had said it is his way of registering a protest against what Modi and has fellows have been up to. “It’s our invitation to Modi to indulge in a rap battle with us instead of an actual war. Let’s battle it out musically, without killing people”.

Pir has also gone for a different set of music and video producers this time around with SomeWhat Super taking over the studio. The two-man band had already created a sensation with their solo tracks such as Bandook and with Modi Teri; they have proved what they’re actually capable of in case a mainstream artists gives them a chance to feature along.

True thoughts: From Shafqat, with love