The offens­ive on Mosul is expect­ed to become the bigges­t battle fought in Iraq since the US-led invasi­on in 2003
By Reuters
Published: October 23, 2016
Tweet Email 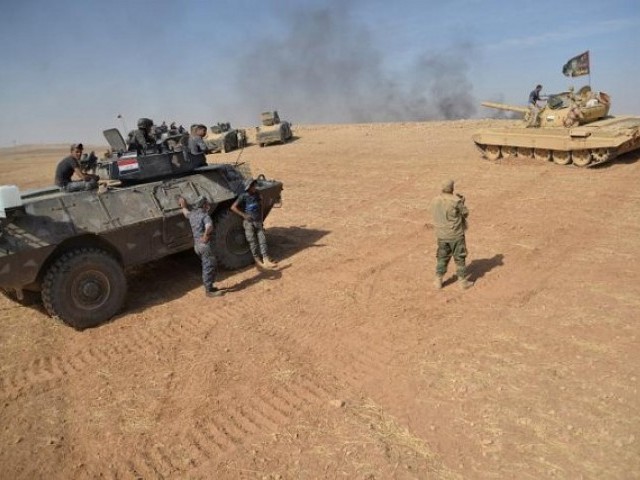 The offensive on Mosul is expected to become the biggest battle fought in Iraq since the US-led invasion in 2003. PHOTO: REUTERS

QAYYARA, IRAQ: Iraqi army troops on Saturday stormed into a Christian region that has been under Islamic State control since 2014 as part of US-backed operations to clear the entrances to Mosul, the militants’ last major city stronghold in Iraq.

The advance took place as US Defense Secretary Ash Carter met Prime Minister Haider al-Abadi in Baghdad to evaluate the campaign that began on Monday with air and ground support from the U.S-led coalition.

A military statement said Iraqi units entered the center of Qaraqosh, a mainly Christian town about 20 km (13 miles) southeast of Mosul, and were carrying out mop-up operations across the town.

Further action was under way to seize a neighboring Christian village, Karamless, also known as Karemlash in the Syriac language. The region’s population fled in the summer of 2014, when Islamic State swept in.

A US military official estimated there were fewer than a couple of hundred Islamic State fighters in Qaraqosh.

“I’ve seen berms in Qaraqosh. I anticipate there’ll be trenches, there’ll be passageways between different buildings,” the official added, speaking on condition of anonymity.

The offensive on Mosul is expected to become the biggest battle fought in Iraq since the US-led invasion in 2003 and it could require a massive humanitarian relief operation.

Some 1.5 million residents remain in the city and worst-case scenario forecasts see up to a million being uprooted, according to the United Nations. UN aid agencies said the fighting has so far forced about 6,000 to flee their homes.

The army is trying to advance from the south and the east while Kurdish Peshmerga fighters are holding fronts in the east and north.

Iraqi forces have advanced to five km (three miles) from Mosul and there are signs of revolt against the group, the interior minister of the Kurdish regional government, Karim Sinjar, said in an interview on Saturday in Erbil.

On the southern front, nearly 1,000 people were treated for breathing problems linked to toxic fumes from a sulfur plant that Islamic State militants are suspected to have set on fire on Thursday, said sources at the hospital of Qayyara, reporting no deaths at the medical facility itself.

The fumes prompted US forces at Iraq’s Qayyara West airfield to put on protective masks.

A cloud of white smoke blanketed the region to the north, where the factory is located, mingling with black fumes from oil wells that the militants torched to cover their moves.

The Iraqi army’s media office said about 50 villages had been taken from the militants since Monday in operations to prepare the main thrust into Mosul itself, where 5,000 to 6,000 IS fighters are dug in, according to Iraqi estimates.

The warring parties are not announcing casualties, with each claiming to have killed hundreds of enemy fighters since Monday.

Islamic State is relying mainly on suicide car bombs, roadside bombs, mines, sniper and mortar fire to counter the charge of the Iraqi units trained by the United States to deal specifically with this kind of warfare.

“The campaign is proceeding according to plan and the schedule that we’ve had,” Carter said after meeting Abadi. The Iraqi prime minister, however, rejected any Turkish participation in the campaign.

Carter signaled during a visit to Ankara on Friday his support for a possible Turkish role and said there was an agreement in principle between Baghdad and Ankara — potentially ending a source of tension.

“I know that the Turks want to participate, we tell them thank you, this is something the Iraqis will handle,” Abadi said after meeting with Carter. “If help is needed, we will ask for it from Turkey or from other regional countries.”

Roughly 5,000 US personnel are in Iraq. More than 100 of them are embedded with Iraqi and Kurdish Peshmerga forces involved with the Mosul offensive, advising commanders and helping ensure coalition air power hits the right targets.

The militants retaliated to the advance of the Iraqi forces and the Kurdish fighters in Mosul by attacking on Friday Kirkuk, an oil city that lies east Hawija, a pocket they continue to control between Baghdad and Mosul.

Authorities in Kirkuk regained control of the city on Saturday and partially lifted a curfew declared after the militants stormed police stations and other buildings. The region’s oil producing facilities were not damaged.

At least 50 people have been killed and 80 others wounded in clashes between security forces and the militants in Kirkuk, according to a hospital sources. Four Iranians doing maintenance work at a power station were among the dead, they said.

A senior US official estimated the number of the militants who attacked Kirkuk at about 80, nearly all of whom were killed or captured. They were mostly foreign fighters trained as commandos who may have received help from sleeper cells inside the city, he said.