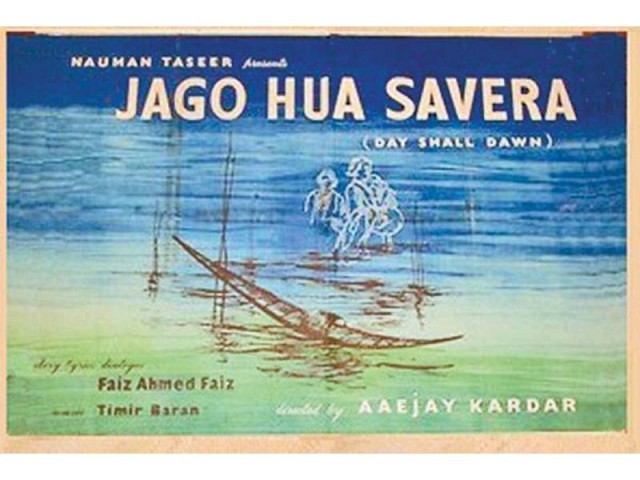 KARACHI: As it has always been with Indo-Pak tensions, the turmoil gives an opportunity to unknowns on either side of the border to conjure up some controversy and bask in the limelight for as long as they can.

Adding to the ongoing wave of hostility, the Mumbai Film Festival has dropped Pakistan’s first Oscar submission, Jago Hua Savera, from its line-up.

It all started when Indian NGO Sangharsh Foundation, which derives its name from an equally bad 1999 movie, filed a complaint with the Mumbai police. According to AFP, Sangharsh said it was inappropriate to show the film, following an attack by militants that killed 19 Indian soldiers in Indian-occupied Kashmir.

In all their wisdom, organisers of the well-reputed film festival agreed to the parallel that was drawn, and said in a statement, “Given the current situation, the Jio MAMI 18th Mumbai Film Festival with Star has decided not to programme Jago Hua Savera as part of the Restored Classics Section.”

But amidst the state-sponsored hysteria that has engulfed Indian media outlets and even the entertainment industry, there still exist voices of sanity that have called for the separation of art from politics. “Amidst the drumbeats of war, some Indians and Pakistanis want to hurt each other so badly that they are happy to hurt themselves in the process,” wrote Indian columnist Shivam Vij.

While the screening was not going to make any money for Pakistan or benefit its actors in any way, the festival’s bowing down to pressure clearly speaks of the influence that jingoistic circles enjoy in both countries.

Talking to The Express Tribune earlier, Jago Hua Savera producer Nauman Taseer’s son Anjum Taseer had said this was the first time a Pakistani film had made it to the Mumbai event.

“It is sad and regrettable that this classic film that features talent from three countries, fell victim to politics. It was so eagerly awaited in Mumbai,” said Anjum’s daughter Nadia Taseer.

The 1959 film was an international collaboration that featured Indian star Tripti Mitra and Bengali actor Anis Ama. Timir Baran, who is known as the father of Indian symphony orchestra, made music for the film while Academy Award winner Walter Lassally served as its cinematographer.

Written by Leftist intellectual Faiz Ahmad Faiz, Jago Hua Savera tells the story of a fisherman who wants to one day own a boat of his own. In the backdrop of extreme poverty, he battles both the exploitation of the local moneylender and death.

Although it was a box office failure, the film had received immense praise from critics and, amongst other accolades, won a gold medal at the inaugural Moscow International Film Festival in 1959.

Having been restored recently through various rolls of 35mm black and white prints, the film was inducted in the classics section of the prestigious Cannes Film Festival in May this year. Following the Cannes screening, Jago Hua Savera saw renewed interest of audiences from Pakistan and around the world. “We showed it at SOAS, University of London and even at Edinburgh University during a workshop on Bengali cinema,” said Anjum.

Talks for bringing the film back to Pakistani theatres and online streaming platforms are presently under way. The Mumbai festival will run from October 20-27.