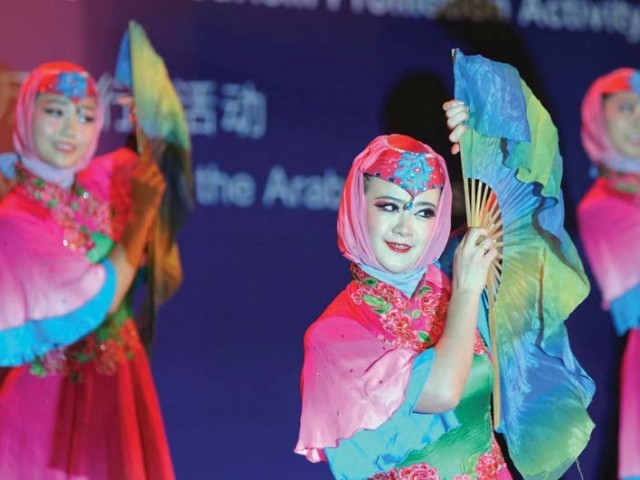 Chinese artists perform during a ceremony to welcome participants of the Friendship Car Rally to Pakistan at the Pak-China Friendship Centre on Sunday. PHOTO: MUHAMMAD JAVAID/EXPRESS

ISLAMABAD: Under a shower of Rose petals and amidst loud cheers, the China-Pakistan Friendship Car Rally was accorded a rousing welcome as it rolled into the capital late on Saturday.

“The rally will open up a new chapter of warm and cordial relations between Pakistan and China,” hoped Information Minister Pervaiz Rashid while addressing a special ceremony held in honour of the participants of the rally at the Pak-China Friendship Centre in Islamabad on Sunday morning.

The 22-car rally with 52 Chinese passengers, including a troupe of dancers, had started their journey in Yinchuan, the capital of Ningxia Hui Autonomous Region, on September 24. Sponsored by the government of the Ningxia Hui and automotive manufacturer Faw, they travelled hundreds of kilometers before entering Pakistan through the 4,693 meters high Khunjerab Pass on Friday morning.

Having rested in Gilgit overnight, they reached Islamabad late on Saturday.

On Sunday morning the motorcade arrived at the Pak-China Friendship Centre where they were welcomed by rows of school children who showered the cars with rose petals while a police band played in the background.

Addressing the ceremony, Ningxia Hui’s Vice-Governor Wang Heshan, explained that the purpose of the rally was to showcase their region’s cultural diversity and to foster the spirit of the Silk Road and China’s One Belt One Road initiative.

Heshan said that different communities, including a large cross-section of Muslims which make up 36 per cent of Ningxia’s population, have peacefully co-existed in the autonomous region for centuries.

“Along this [Silk] road, businessmen and envoys travel through mountains and deserts, trading specialties and learning exotic cultures,” said Chinese Ambassador Sun Weidong, adding that China and Pakistan have been connected through the great Silk Road for hundreds of years.

“By promoting exchanges among ethnic groups, cultures and religions, the Silk Road advanced our civilizations … the ancient Silk Road is now transforming into connectivity, industrial cooperation, trade and finance, and flow of information,” said the ambassador.

Talking about the China-Pakistan Economic Corridor (CPEC), Weidong said that it was a major and pilot project of the One Belt and Road Initiative and that around 16 early harvest projects are under construction with a total investment of $13.8 billion.

“CPEC will bring benefits to all Pakistani people,” he said.

The Chinese envoy also addressed concerns about the western route of the project stating categorically that “the passage going through western part of Pakistan to Gwadar is definitely part of CPEC.”

“As we see it, all the routes lead to development and prosperity,” he said.

Information Minister Rashid said Pakistan-China relations were now higher than the highest mountain, deeper than the deepest sea and sweeter than the sweetest honey as he termed the two countries “iron brothers”.

Rashid called for increasing cultural links between the two countries and taking them beyond state-level activities.

“Pakistan presents attractive tourist destinations and participants of the rally would certainly observe that feature of our country,” he said.

Later, the travelling artists from the Ningxia Performing Arts Group presented traditional dances and songs of their region.

A dance troupe from the Pakistan National Council of the Arts also performed Bhangra, Jhoomer, and Kailash dances to the beat of Rubab, Tabla and Dhol.

The rally is now expected to travel to Lahore then to Karachi before visiting Gwadar in a leg called the “Walking in Pakistan-China Friendship”. The rally will then cross into Iran before heading to the Middle East.