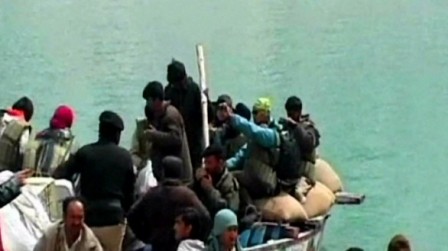 Evacuations underway in nearby villages.

HUNZA: Water outflow from the spillway of a lake formed by landsliding in Hunza has stopped on Monday, causing flooding in adjacent areas.

The water from the lake in the Atta Abad area submerged 88 houses in Aeenabad and Shashkat while two bridges have also been swept away. The two areas also lost their ground link to other areas.

The water has reached Gilmat village where 42 houses and a commercial market were earlier evacuated.

Evacuations are also underway in other nearby villages.

The lake is 16 kilometers long and 350 meters wide. 2500 cusecs water is adding to the lake’s water, daily. The lake does not have an appropriate spillway which is threatening the lake to burst. FW and army engineers are working tirelessly to resolve the issue.