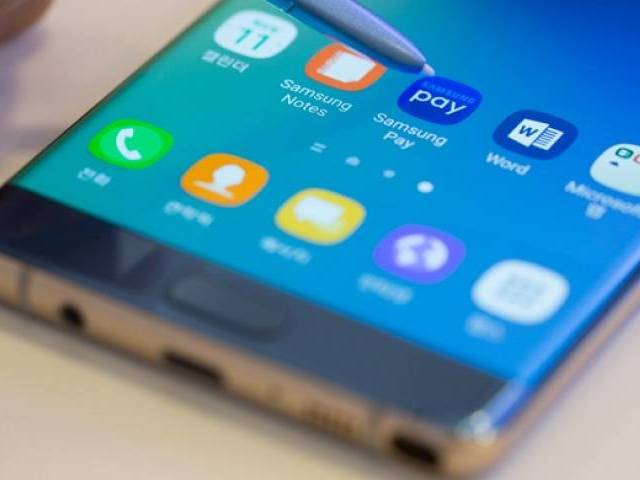 Samsung announced a global recall of at least 2.5 million of its flagship Note 7 smartphones. PHOTO: AFP

Samsung, the world’s largest smartphone maker, announced a global recall of at least 2.5 million of its flagship Note 7 smartphones in 10 markets in early September due to faulty batteries causing some phones to catch fire. There have also been reports that replacement phones have caught fire.

“We have the new iPhone, we’re about to launch the new Google Pixel, which is exclusive to us. We’ve got great phones from Motorola as well,” Verizon spokeswoman Kelly Crummey said. “I think you’ll see our marketing focused on those devices because there is certainty on those at this time.”

When asked in a subsequent interview to elaborate on the company’s marketing plans, Crummey said Verizon was awaiting results from a US government investigation into the Galaxy Note 7 devices before finalizing its marketing budgets.

Verizon said on Monday it has suspended sales of the Note 7.

The US Consumer Product Safety Commission (CPSC) is investigating the Samsung Galaxy Note 7. Last month, the agency issued an advisory to Note 7 users asking them to turn off or stop using the device.

US top court to hear Apple-Samsung feud over iPhone designs

The recall, the scale of which was unprecedented for Samsung, and reported incidents of replacement devices catching fire, are a costly setback for the phonemaker. It had been counting on Galaxy Note 7 to bolster sales as rivals such as Apple Inc launch new devices.

Samsung announced the recall on Sept. 2. But similar problems arose with a replacement Note 7 on Oct. 5, which began smoking inside a Southwest Airlines flight in the United States.

Following the reports, US wireless carriers Verizon, AT&T Inc, T-Mobile US Inc and Sprint Corp announced that they have halted sales and exchanges of the Note 7. They are letting customers exchange the device for other phones.