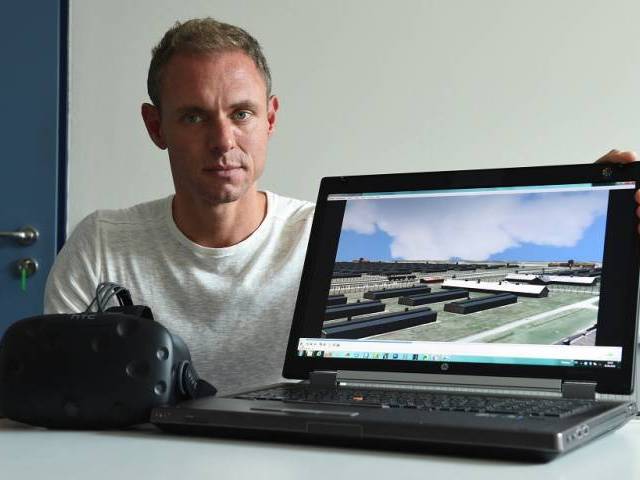 Ralf Breker of the Bavarian criminal police posing with virtual reality glasses and a computer which shows a picture from the 3D model of the former Nazi concentration camp Auschwitz. PHOTO: AFP

MUNICH, GERMANY: Slipping on a virtual reality headset, the indelible images come into view: the steel rails, the imposing brick gatehouse, the rows of identical barracks, the gas chambers, the crematoria.

Thanks to the work of the Bavarian state crime office (LKA) in Munich, German prosecutors and police investigating the last living Nazi war criminals can now immerse themselves in a highly precise 3D model of Auschwitz.

The VR death camp offers 21st-century fact-finding technology for the final Holocaust trials, in a twilight bid by the German justice system to address the atrocities committed seven decades ago.

“It has often been the case that suspects say they worked at Auschwitz but didn’t really know what was going on,” Jens Rommel, head of the federal office investigating Nazi war crimes, told AFP.

“Legally, the question is about intent: must a suspect have known that people were being taken to the gas chambers or shot? This model is a very good and very modern tool for the investigation because it can help answer that question.”

“To my knowledge, there is no more exact model of Auschwitz,” Breker, 43, said in an interview at his workshop.

“It is much, much more precise than Google Earth,” he said, citing the popular map programme. “We use the most modern VR goggles on the market. When I zoom in, I can see the smallest detail.”

Wearing the headset, prosecutors, judges and co-plaintiffs can have the chilling experience of moving about 1940s-era Auschwitz at will.

An eerie stillness pervades the scene as a seemingly endless stream of identical avatar prisoners march past the virtual visitor from the future. Even the trees stand where they once were, to determine whether they could have blocked the view from a certain vantage point.

“The advantage the model offers is that I get a better overview of the camp and can recreate the perspective of a suspect, for example in a watchtower,” Breker said.

The case that gave rise to the project was that of Johann Breyer, a Czech-born retired machinist accused of complicity in the killing of 216,000 Hungarian Jews at Auschwitz.

Prosecutors in the Bavarian town of Weiden put together the case with the help of an early version of the 3D model.

But the 89-year-old American died in June 2014, just hours before a US court approved his extradition to stand trial.

This year, a more advanced model was used in the case of former SS guard Reinhold Hanning, who was convicted in June of complicity in 170,000 murders at Auschwitz and sentenced to five years’ imprisonment.

Rommel, 44, said his team is investigating a few dozen suspects, of whom he estimates a “double-digit number” are still alive and could potentially face court.

To make his computer-generated recreation of hell on earth, Breker used materials from the Warsaw surveyor’s office and more than a thousand period photographs to create orthophotos, the uniform-scale base maps onto which buildings can be overlaid.

Then he travelled to Auschwitz twice in 2013 to fill in the gaps.

He and a colleague used a terrestrial laser scanner to create 3D images of the structures that were left standing after the Germans destroyed much of the camp while retreating from the advancing Soviet army.

The buildings that were ripped down or blown up in 1945 had to be reconstructed virtually with the help of the vast Auschwitz archives.

“The Germans were very precise — we were able to rebuild every single structure because we had blueprints for each one,” Breker said.

The ruddy-cheeked career investigator turned pale as he recounted what he learned there.

“Our team only investigates murders and we’re usually the first at a crime scene so there’s a lot we see that is very unpleasant,” said Breker, a seven-year veteran of the force.

“But when I got back to the hotel room each night after being at Auschwitz, I was shattered.

“We spent each day with the head of the archive and he provided us with so many shocking details.”

Breker recounted the story of the campaign between May and July 1944 when some 438,000 Hungarian Jews were deported to Auschwitz-Birkenau.

The sheer volume of people gassed and cremated every day created such intense heat that it cracked the chimneys, leading the SS to burn bodies on pyres outside the crematoria.

“The SS men then actually built drains for the fat to collect from the bodies, which could be used to fuel the fire for the next round of corpses,” Breker said.

“There are truly no words for it,” he whispered.  “Unbelievable.”

The LKA said that once the last criminal probes are closed, it would in theory be willing to lend its model to Holocaust memorial sites such as Yad Vashem or Auschwitz itself, giving visitors a visceral experience of the camp.

50% chance we’re living in The Matrix: Bank of America

“Of course we’d have to be extremely careful no one stole it — the nightmare would be abuse of the data,” such as the creation of a computer game, Breker said.

He said VR technology was set to become a staple in criminal investigations around the world.

“In two or three years, you’ll be able to enter the scene of every serious crime virtually,” he said.

The LKA has already started using VR as part of an investigation it reopened two years ago into a far-right attack in 1980 at Munich’s Oktoberfest beer festival which killed 13 people.