Philippines' Duterte not Hitler, but wants to kill millions: spokesperson

Philippines' Duterte not Hitler, but wants to kill millions: spokesperson 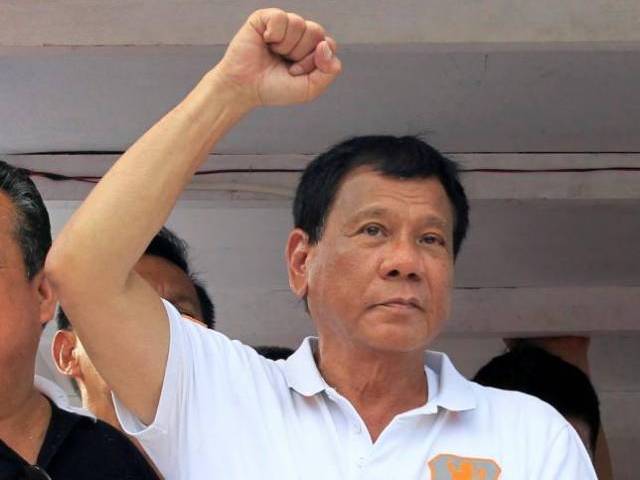 MANILA, PHILIPPINES: Philippine President Rodrigo Duterte does not want to be branded another Hitler but he is willing to kill three million people in his crime war, his spokesperson said Saturday.

Duterte has faced international condemnation after on Friday likening his anti-drugs crackdown, which has left more than 3,000 dead, to Nazi leader Adolf Hitler’s efforts to exterminate Jews.

“We do not wish to diminish the profound loss of six million Jews in the Holocaust,” presidential spokesman Ernesto Abella said in a statement.

“The president’s reference to the slaughter was an oblique deflection of the way he has been pictured as a mass murderer, a Hitler, a label he rejects.”

Nevertheless, Abella confirmed Duterte had intended to say he wanted to kill millions of people in the Philippines to achieve his mission of eradicating illegal drugs.

Don’t do drugs: Philippine’s Duterte to workers returning from Saudi

“Duterte was referencing to his ‘willingness to kill’ three million criminal drug dealers – to save the future of the next generation and the country,” Abella said.

On Friday Duterte raised the example of Hitler’s genocidal campaign to eliminate Jews, while discussing his anti-drugs crackdown.

“There are three million drug addicts (in the Philippines). I’d be happy to slaughter them,” Duterte said.

“At least if Germany had Hitler, the Philippines would have,” he said, then paused. “But you know, my victims, I would like to be (sic) all criminals to finish the problem of my country and save the next generation from perdition.”

The United Nations special adviser on the prevention of genocide, Adama Dieng, warned Duterte may be in danger of committing crimes against humanity.

Dieng called on Duterte to “exercise restraint in the use of language that could ‘exacerbate discrimination, hostility and violence and encourage the commission of criminal acts which, if widespread or systematic, could amount to crimes against humanity'”, a UN statement said.

Duterte, 71, won elections in May in a landslide after a campaign dominated by his pledge to eradicate drugs in society by killing tens of thousands of people.

He has said the Philippines is in danger of becoming a narco state.

Since Duterte came to power on June 30, police have killed more than 1,200 people and about 1,800 others have died in unexplained circumstances, according to official figures.

Philippines’ Duterte: Obama must listen to me on human rights

Before his Hitler comments, Duterte had faced a barrage of criticism from Western governments and rights groups over the apparent extrajudicial killings.

Duterte has reacted defiantly and often with abusive language to the criticism, while insisting he is not doing anything illegal.

Duterte has branded US President Barack Obama a “son of a whore”, called UN chief Ban Ki-moon a “fool” and said “fuck you” to the European Union while raising his middle finger.