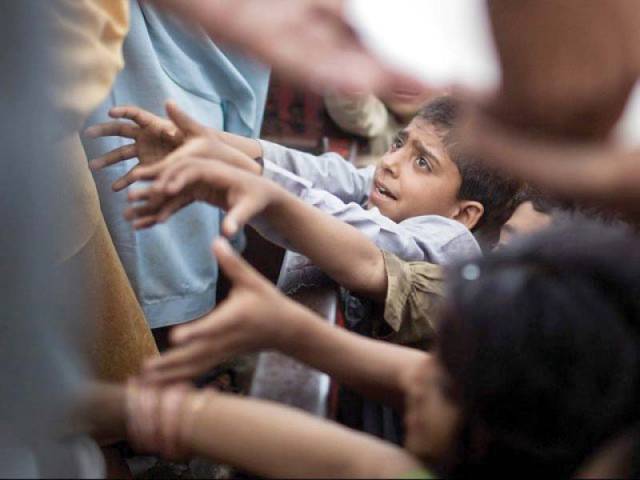 Around 15% of the population under the age of five is acutely malnourished. PHOTO: FILE

ISLAMABAD: Despite having surplus food to feed its population, 43% of the country’s citizens remain food insecure with 18% facing a severe shortage, said World Food Program (WFP) Country Director Lola Castro in an exclusive interview with The Express Tribune.

Castro is concluding her three-year term and declared Pakistan a food-sufficient country with largest irrigation system, but also a place that remained incapable of serving its large population.

Facing the hunger tide: The odds are not in our favour

Around 15% of the population under the age of five is acutely malnourished. Close to 43% children (around 10 million) face stunted growth and are chronically malnourished, said Castro, adding that most of them are in FATA, Balochistan and Tharparkar.

“The problem is not food production, but poverty and illiteracy that bar people from access to food with required calories and nutrition,” said Castro. “Children and women are the most vulnerable as far as food insecurity is concerned.

“In cases where they do get food, it is nowhere near the required level of calories and nutrition, especially for mothers and growing children.

“Close to 18% of the country’s population gets less than 1,700 calories per day, making them severely food insecure. The requirement for a healthy individual is at least 2,350 calories per day.”

Suggesting solutions, Castro said that the vulnerable population needed subsidised food and support through different programmes including the Benazir Income Support Programme, which presently covers around 5 million people. “There is a need for further expansion of such programmes.”

Pangs of hunger: ‘There is not as much agitation on hunger as is seen on electricity issues’

Castro added that Pakistan needed to diversify its produce and add variety to its crops.

“Apart from the areas mentioned, internally displaced people remain vulnerable to food insecurity and WFP, with the government of Pakistan, has successfully launched many initiatives including the Zero Hunger Program to support them. Under these programs, initially, 327,104 families were supported but the figure has now reduced to 119,369 after many displaced families returned to their homes.