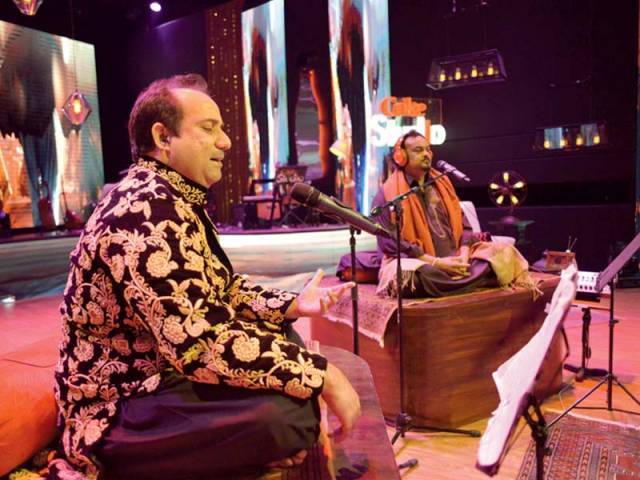 KARACHI: The ninth season of Coke Studio ended on Friday with a grand finale that featured the most-awaited song of the season. While five other tracks were also part of the episode, all the emotions, tears and prayers were reserved for this one song and for good reason.

Nearly three months ago, renowned qawwal Amjad Farid Sabri’s life was cut short, leaving his fans, foes and family wondering where he came from and where he went. Several weeks may have gone by and most may have forgotten the murder, the void is far from being filled.

Aaj Rung Hai was qawwali performed by Nusrat Fateh Ali Khan and Amjad’s father and uncle, the Sabri brothers, in a rare live collaboration at a venue in Karachi nearly 40 years ago. For ardent Coke Studio fans, it holds immense importance; having been sung by artists such as Hadiqa Kiani and Fareed Ayaz and Abu Muhammad on the show previously.

However, this posthumous release of Amjad, which features Rahat Fateh Ali Khan representing his uncle, has left most teary-eyed over the tragic assassination of the iconic qawwal.

The maestros had reportedly recorded the track in one go. “We all cried that night. These two masters took us to a very different journey, a journey we can never forget. The tragic death of Amjad Sabri is a huge national loss. In spite of his great success nationally and internationally, he was a gentle and humble person, treasured and respected by everyone who met him,” Strings had said in a statement.

Following the release of Aaj Rung Hai, tributes began pouring in from around the world. Indian journalist Aditya Menon took to Twitter, saying, “Music cannot get more magnificent than this. Those who #SayNoToPakArtist carry same hate as Amjad Sabri’s killers.” Bollywood film critic Aseem Chhabra added, “#AmjadSabri silenced forever.  #RahatFatehAliKhan silenced in India … But how good they are here.”

The 12-minute piece features Amjad and Rahat sing to minimal music, taking turns with improvising and showcasing their true mettle.

Sharing the track, journalist Fifi Haroon said, “Those who killed Amjad Sabri will one day die unnoticed and unsung. Amjad’s voice will be heard for generations. Music lives on. Talent never dies.”