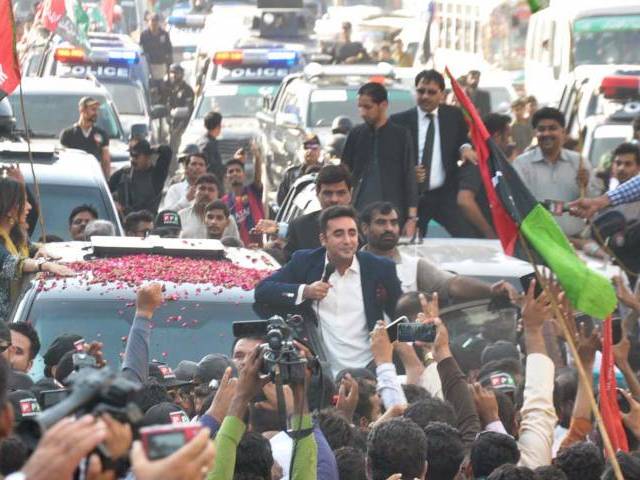 KARACHI: Pakistan Peoples Party (PPP) Chairperson Bilawal Bhutto Zardari has once again called Prime Minister Nawaz Sharif ‘the king of graft” during his visit to a constituency in Karachi’s Malir area, where a PPP candidate won a provincial assembly seat in a recently held by-poll.

“Gali gali mein shor hay, Nawaz Sharif chor hay [It is talk of the town that Nawaz Sharif is a thief],” an emotionally charged Bilawal chanted in response to the slogans of the PPP workers, gathered to receive the PPP chairman at the locality.

As if getting carried away by enthusiasm, Bilawal also shouted: “Takht-e-Raiwind ko ek dhakka aur do, girti huwi deewar ko, ek dhaka aur do [give a final push to the already falling government].”

Later, addressing the workers, the PPP chief said the city of Karachi belongs to his party and will remain its territory in future. He also appealed to the people of Malir to participate in a big show being arranged to mark the anniversary of Karsaz incident.

Bilawal, whose visit was planned in the wake of the PPP’s victory at PS-127, also appreciated the workers and leaders for their support in the by-elections. “We once again regained our old constituency which was snatched from us through election rigging,” he said.

At odds: Our lawmakers will not resign, says MQM leader