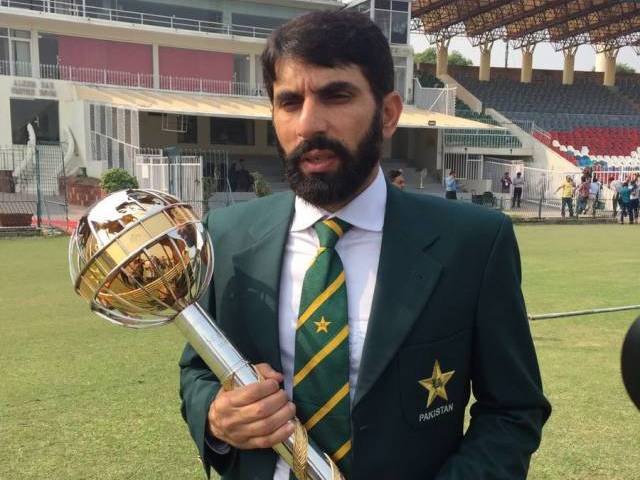 Pakistan Test captain Misbahul Haq received the Test mace, given to the world’s best side in the format, from the International Cricket Council (ICC) today in Lahore.

Speaking at the ceremony at Gaddafi stadium, the 42-year-old said, “This is an exciting occasion for us, for me and for the team as well, to receive such an honour for our country.”

He added: “We are really happy about it that finally we are number one.”

This is the first time a Pakistani captain has received this award.

ICC to present Test mace to Misbah on September 21

Pakistan rose to number one in the longest format of the game after drawing 2-2 against England in England. They currently have 111 points, just one more than arch-rivals India who are second in the rankings. The third position is shared by Australia and England who have 108 points each.

Talking about the achievement, Misbah said that what makes this reward all the more satisfying is that Pakistan have gained a top rank while playing all their matches on foreign soils.

“We have played all our matches on grounds which are foreign to us,” he said.

“Even Dubai and Abu Dhabi are foreign grounds.

“Nevertheless, we are the number one Test side in modern cricket where teams usually rely on home advantage to increase the rankings,” he added.

Pakistan's @captainmisbahpk explains just how great it is to have the ICC Test Championship Mace for the first time in Pakistan's history! pic.twitter.com/LHqlQEpCRH

Pakistan last played a Test in the country in 2009 before the Sri Lankan cricket team attack which claimed the lives of seven police officials and injured seven players. Since then, almost all home games have been played at neutral venues in the United Arab Emirates.

“There can’t be a better location to receive the mace than the ground where we last played a home Test seven years ago,” said Misbah in the post ceremony press conference.

“It is ironic for both the players as well as the fans that the journey to the number one position has been outside Pakistan.

“The players have missed on the crowd support, while the spectators have been unable to watch live some magnificent team and individual performances. But I am confident that things will change and international cricket will soon return to Pakistan.”

The Test captain added that he was delighted to hold the mace in the twilight of his career.

“It has always been a dream to lift an ICC trophy as captain and to achieve this honour in the traditional format of the game is something to be very proud of,” he said. “This mace is a reward for the efforts and hard work of each and every individual who has been part of this group over the past few years.”

We can beat you anywhere: Misbah told Cook

ICC Chief David Richardson, who presented Misbah with the mace, congratulated the national side as well.

“The ICC Test Championship mace is a symbol of excellence and a recognition of a side’s outstanding performance in the purest format of the game,” he said.

“Pakistan is a deserving recipient of the mace and it is all the more impressive that it has reached the number one Test ranking despite not being able to play a series in front of its home crowd since 2009.

“On behalf of the ICC, I want to congratulate the Pakistan cricket team and Misbah in particular for the way he has led his side. I hope that the team continues to go from strength to strength.”

The mace was valued at £30,000 in 2001 and automatically passes from one team to another as results confirm a change of leadership in the ICC Test Team Rankings table.