Suarez and Neymar were also on target during a 5-1 thrash­ing of newly promot­ed club on Saturd­ay
By AFP
Published: September 17, 2016
Tweet Email 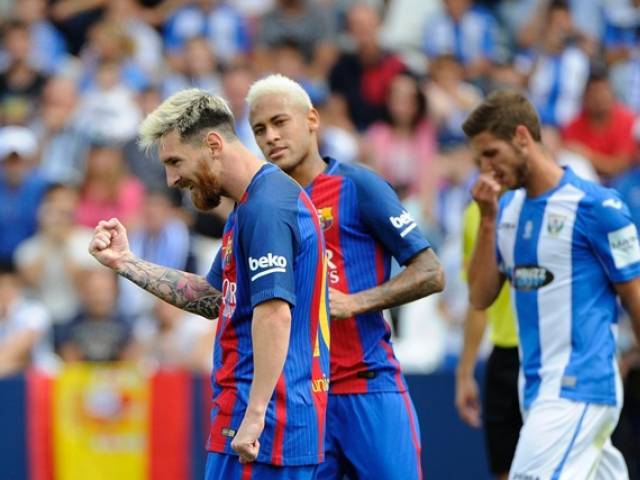 BARCELONA / MADRID: Lionel Messi, Luis Suarez and Neymar were all on target as Barcelona got back to winning ways in La Liga with a 5-1 thrashing at newly promoted Leganes on Saturday.

Suarez and Neymar tapped home to give Barca a healthy half-time lead before a Messi penalty and wonder strike from Rafinha made it 5-0.

Barca move level with Real Madrid at the top of the table, but Madrid play their game in hand away to Espanyol without the injured Cristiano Ronaldo and Gareth Bale on Sunday.

Messi, Suarez and Neymar were starting together for only the second time this season and, just as in a 7-0 thrashing of Celtic on Tuesday, showed no mercy as Leganes’s high defensive line was torn apart in the first-half.

Leganes were punished moments later when Suarez showed great strength to burst down the right and his low cross was easily turned home by Messi.

The roles were reversed for Barca’s second when Messi was gifted possession inside the Leganes half and waltzed past two defenders before teeing up Suarez for a tap-in.

Suarez bagged his second assist of the half just before the break when he was released clear on goal and selflessly squared for Neymar this time to roll into an empty net.

All of Barca’s front three were involved for the fourth 10 minutes after the break as Neymar latched onto Suarez’s ball over the top and was dragged down by Unai Bustinza.

Suarez delighted to run riot with Messi and Neymar again

Messi showed no signs of the penalty yips he suffered last season and at the Copa America in June as he fired into the top corner for his eighth goal in as many games this season.

However, the two best goals of the afternoon were still to come as Rafinha cut inside onto his weaker left foot to unleash a rocket into the top corner for Barca’s fifth.

Leganes got the reward their display merited 10 minutes from time when Gabriel curled a sensational free-kick past the helpless ter Stegen.

Real Madrid will have to cope without Cristiano Ronaldo and Gareth Bale in the quest for a club-record 16th straight La Liga win after coach Zinedine Zidane said both will miss Sunday’s trip to Espanyol.

Bale was forced off early by a hip knock as Real came from behind in dramatic fashion to beat Sporting Lisbon 2-1 on Wednesday in the Champions League. Ronaldo started Real’s fightback against his old club, but misses out this weekend due to illness.

“Cristiano won’t travel. He has a problem with his throat and is not ready to play,” Zidane said on Saturday. We are not going to risk anything and much less so with Ronaldo.”

Zidane also stressed Madrid’s busy schedule with five games in the next two weeks was also behind his decision to leave out Bale.

“He suffered a heavy blow [on Wednesday] so we won’t risk anything. All the players want to play, but we have a lot of games,” added Zidane. If Gareth gets another knock on the same area he could be out for 10 days or more. I prefer that he is 100 percent for Wednesday [against Villarreal].”

Zidane hinted that James Rodriguez may finally get his chance to start for the first time this season in the absence of Ronaldo and Bale after impressing as a substitute against Sporting.