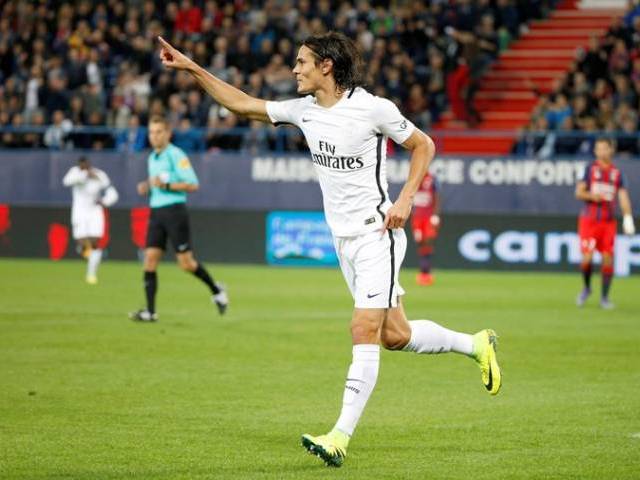 PARIS: Uruguayan striker Edinson Cavani shrugged off his Champions League woes to score four goals in the first half as Paris Saint-Germain (PSG) romped to a one-sided 6-0 win at Caen in Ligue 1 on Friday.

The 29-year-old, charged with filling Zlatan Ibrahimovic’s sizeable boots this season, was criticised for missing several gilt-edged chances in PSG’s 1-1 draw with Arsenal on Tuesday, despite scoring the opener against the Premier League club inside 42 seconds.

But the former Napoli striker hit back by scoring four times in the space of 35 first-half minutes at the Stade Michel-d’Ornano as PSG claimed their most convincing win so far under new coach Unai Emery.

Lucas Moura and Jean-Kevin Augustin added further goals after the break as PSG ended a run of three games without a win in all competitions and went top of the table on goal difference from Monaco and Nice ahead of the rest of the weekend’s games.

With this game coming just 72 hours after Paris faced Arsenal in their Champions League opener, Emery opted to leave Thiago Silva and Marco Verratti on the bench at kick-off.

Thomas Meunier replaced Serge Aurier at right-back, but Alphonse Areola kept his place in goal at the expense of Kevin Trapp while Hatem Ben Arfa was again left out of the visitors’ squad in Normandy.

Monaco, fresh from winning at Tottenham Hotspur in the Champions League on Wednesday, can reclaim top spot when they host Rennes on Saturday, meanwhile Nice visit Montpellier on Sunday before Marseille host Lyon in the game of the weekend.