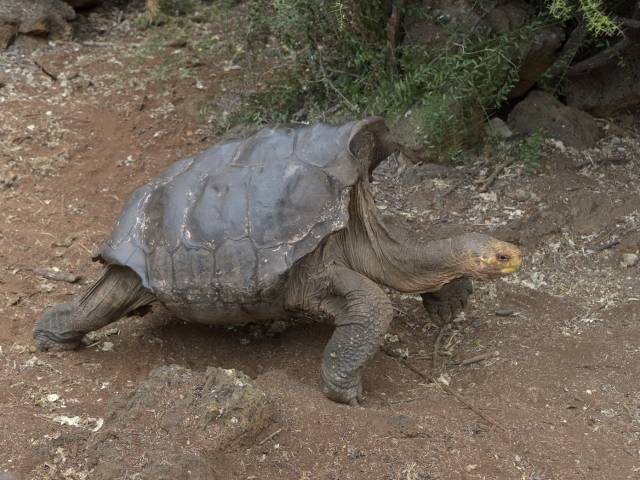 He’s over 100 years old, but his sex life is the stuff of legend. Diego the Tortoise is quite the ladies’ man, and his exploits have helped save his species from extinction.

Diego, a Galapagos giant tortoise, has fathered an estimated 800 offspring, almost single-handedly rebuilding the species’ population on their native island, Espanola, the southernmost in the Galapagos Archipelago.

Diego is a Chelonoidis hoodensis, a species found in the wild only on Espanola. The island is one of the oldest in the Galapagos, the Pacific archipelago made famous by Charles Darwin’s studies of its breathtaking biodiversity.

Around 50 years ago, there were only two males and 12 females of Diego’s species alive on Espanola, and they were too spread out to reproduce. He has done more than any other tortoise to turn that around — with the help of his mates, of course.

Diego lives at a tortoise breeding center on Santa Cruz Island, one of the largest in the Galapagos. He is the dominant male of the three assigned to repopulate Espanola. He shares his enclosure with six females, his partners in the task of saving their species.

Tough work, but some tortoise has to do it.

Giant pandas are no longer on the ‘endangered’ list

On a cloudy morning with chilly wind, Diego timidly peeks his head out from his thick shell, then slowly plods toward some leaves for breakfast.

“Look, look! He came out. How pretty,” said a young girl as she looked on.

Diego weighs about 80 kilograms, is nearly 90 centimeters long and 1.5 meters tall if he really stretches his legs and neck. He has a mysterious, globe-trotting background to go with his reputation as a Casanova. Diego was found at the San Diego Zoo — hence his name — after Chelonoidis hoodensis was identified as a specie

“We don’t know exactly how or when he arrived in the United States. He must have been taken from Espanola sometime between 1900 and 1959 by a scientific expedition,” said Tapia.

After being located at the zoo in California, Diego was brought back to the Galapagos in 1976 and put in the captive breeding program.

Little did scientists realise just how effective he was, until six years ago.

“We did a genetic study and we discovered that he was the father of nearly 40 per cent of the offspring released into the wild on Espanola,” Tapia told AFP.

In all, around 2,000 tortoises have been released on the small island. Thanks to the program, the species is no longer facing extinction.

“I wouldn’t say (the species) is in perfect health, because historical records show there probably used to be more than 5,000 tortoises on the island. But it’s a population that’s in pretty good shape — and growing, which is the most important,” said Tapia.

Of the 15 species of giant tortoise known to have originated in the Galapagos, three have gone extinct — victims of 18th-century pirates who plundered the islands’ fragile ecosystem.

Diego’s species has also been introduced on the island of Santa Fe, where a genetically similar one, Chelonoidis spp, disappeared more than 150 years ago.

Not all critically endangered tortoises rise to the challenge as Diego has. Hopes for another threatened species, Chelonoidis abingdoni, faded when its last known survivor died in 2012 at more than 100 years old. Known as Lonesome George, he had refused for years to breed in captivity.