The blazes last year were among the worst in memory­
By AFP
Published: September 14, 2016
Tweet Email 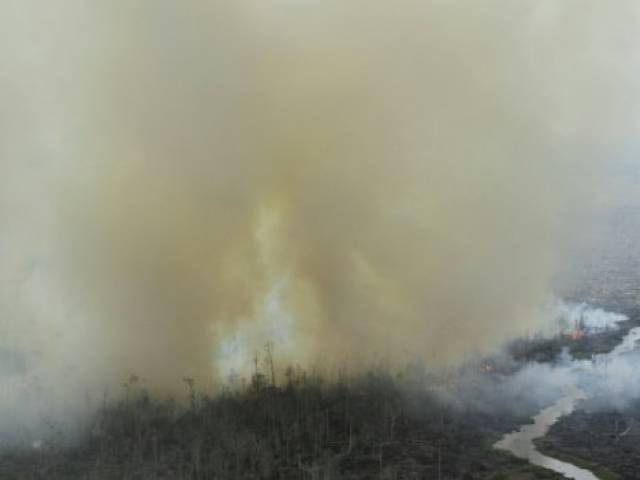 Fatwas have no legal force and are aimed at encouraging the devout against taking a certain course of action. PHOTO: AFP/ FILE

Indonesia’s top Islamic clerical body said Wednesday it has issued a fatwa against intentionally starting forest fires in a bid to stop the blazes that cloak Southeast Asia in haze every year.

The religious edict by the Indonesian Ulema Council said it was “haram”, or against Islamic law, for Muslims to start fires on purpose in forests or on plantation land.

“The Quran states that we are not allowed to harm the environment, and forest burning causes damage not only to the environment but also to people’s health — even neighbouring countries are complaining,” Huzaemah Tahido Yanggo, head of the body’s fatwa council, told AFP.

The fires and subsequent smog occur annually to varying degrees in the archipelago’s Sumatra island and the Indonesian part of Borneo during the dry season, and are started to quickly and cheaply clear land for palm oil and pulpwood plantations.

The blazes last year were among the worst in memory and cloaked large parts of Indonesia, Malaysia and Singapore in choking smog for weeks.

Environment and Forestry Minister Siti Nurbaya Bakar welcomed the fatwa and said she hoped Islamic preachers would spread news of it to local communities: “The most important follow-up is communicating it to the public.”

Fatwas have no legal force and are aimed at encouraging the devout in the world’s most populous Muslim-majority country against taking a certain course of action.

But it remained unclear whether the latest edict, issued Tuesday, would have any practical effect in the sprawling archipelago of more than 17,000 islands and 255 million inhabitants.

The council has previously issued fatwas to protect the environment, including one against the illegal hunting and trade in endangered animals in the biodiverse country, which environmentalists said was the world’s first.

The move by the clerics follows efforts by Jakarta to prevent a repeat of last year’s haze disaster. Authorities plan to stop granting new land concessions for palm oil plantations, and have established a new agency to restore millions of hectares of carbon-rich peatlands susceptible to fires.

The blazes have not been as serious this year with Singapore so far suffering just one day of serious haze, although it is unclear whether that is due to official efforts or a late rainy season.