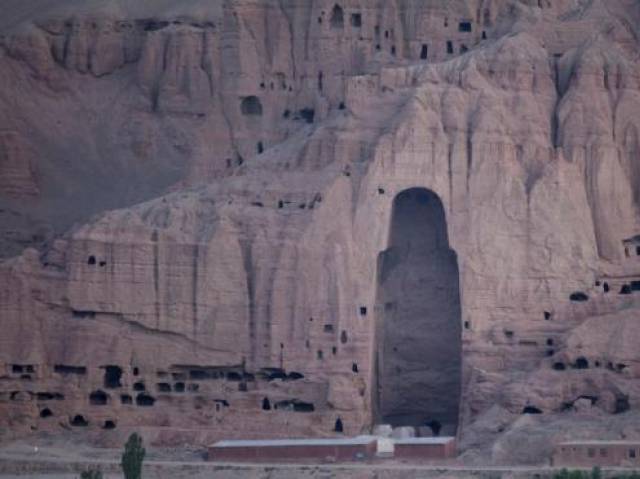 A close-up view of the Large Buddha niche in Bamiyan in central Afghanistan August 16, 2009. PHOTO: REUTERS

For archaeologists Afghanistan, rich in ancient treasures and once a key stop on the legendary silk road, is an “open-air museum”, albeit one ravaged by war and plagued by looters.
After 30 years of conflicts, Afghanistan’s cultural heritage is in dire straits, but one group of archaeologists is trying to put the country’s historical sites back on the map – literally.
An international team is working to map the country’s numerous sites and monuments with satellite imaging into a huge database — a giant geographic information system (GIS).
“The authorities have long feared encouraging looting by locating such sites… In fact, most have already been looted, ” says Julio Bendezu-Sarmiento, a French-Peruvian archaeologist who heads the French Archaeological Delegation to Afghanistan (DAFA).
The project is going ahead now because “it is often the looters who are best informed about where the archaeological sites are,” he adds, so a database will not affect this.

Afghanistan’s location and the variety and abundance of its bountiful mines of gold, copper and precious stones make it an archaeological holy grail. The Afghan lapis-lazuli, a brilliant blue semi-precious gemstone, was used as decoration by the Egyptian pharaohs and the great kings of Assyria and Babylon, Bendezu-Sarmiento notes.
In DAFA’s offices a large satellite image of the country, with its bust bowls, deep valleys and steep mountains, is shown on a widesceen display. Heritage sites are indicated by yellow, blue and red dots depending on whether they have been excavated, identified or only recently discovered.
The work consists of linking this mapping to each site in the database.
In 1982, under pressure from Soviet Russia which had invaded Afghanistan, DAFA — who had been there since 1922 — had to leave the country where they’d identified 1,286 heritage sites.
“Today, we’ve identified five times that,” Bendezu-Sarmiento says.
On the map, there are numerous marks as the archaeologists try to connect information from the first excavations in the 1930s.
“The country is huge, with an enormous wealth of sites,” says Elena Leoni, an Italian archaeologist specialising in Central Asia and GIS.
Leoni gives the example of the historical town of Balkh in northern Afghanistan, known to the ancient Greeks as Bactra, where an incredible amount of gold was discovered.
Often compared to the famed treasures discovered in the burial chamber of Egyptian king Tutankhamun, “L’Or de Balkh” is shown all over the world as part of a touring exhibition.
Thomas Lorain, the organisation’s scientific secretary adds: “When one digs, one always stumbles across something.”
Mohamed Nader Rassouli, a consultant at DAFA who is esteemed by his colleagues as a living “library of Afghan archaeology” and studied the subject in Russia in the 1960s, has seen his country’s vast cultural heritage tragically squandered.
“Houses have been built over the sites around Kabul that DAFA excavated in 1937,” he laments.
“And in the provinces, sites have been destroyed by looters and antiquities traffickers as well as people simply working in the fields,” he adds.

For the Afghan authorities, the archaeological map will also serve as a tool for ministries to launch major development projects, explains Haroon Hakimi, spokesman for the ministry of culture.
“People say Afghanistan is an open-air museum,” he says. “It is vital to identify these sites, then you know where they are when you want to build roads, operate mines or drill for oil.”
This is especially important as the government is in the process of distributing mining concessions and according to sources plans to sign at least 25 contracts this year.
“Interest in mineral resources is not a modern thing and it was the desire to exploit and manage these resources that undoubtedly led to the creation of these great cities,” Bendezu-Sarmiento says.
Mes Aynack, a huge historical site with thousands of Buddhas located south of Kabul, was discovered by a Chinese mining company because of the huge amounts of copper lying beneath the ruins.
The Metallurgic Corporation of China agreed to suspend its work there, but Afghan archaeologist Rassouli says many other sites remain at risk.
“Once this map is complete, it will be publicly available for people so that they can participate in its protection. Everyone must do their bit,” Rassouli said.