Doctor Zakaul­lah Khan was killed late Saturd­ay when gunmen on a motorb­ike opened fire near his house
By AFP
Published: September 11, 2016
Tweet Email 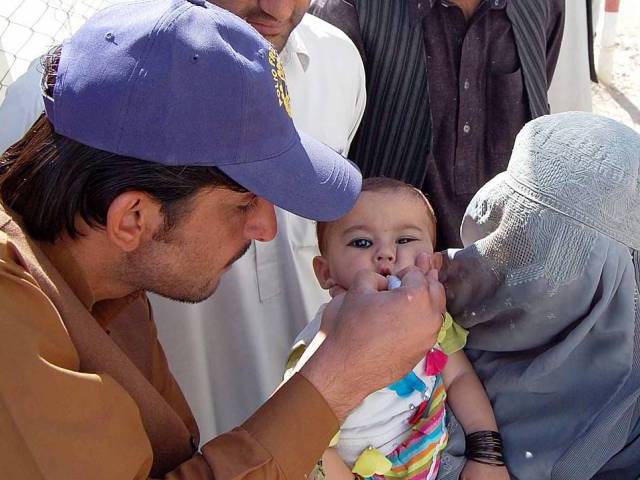 A file photo of a helath worker vaccinating a child. PHOTO: APP

PESHAWAR: Gunmen on a motorbike shot dead a senior member of the country’s polio eradication campaign in Peshawar, police said Sunday, in the latest attack on immunisation teams by extremists.

Attempts to eradicate polio in Pakistan have been hit by militant attacks on inoculation teams that have claimed more than 100 lives since December 2012.

Doctor Zakaullah Khan, a seasoned member of Peshawar’s polio vaccination campaign near the country’s restive tribal belt, was killed late Saturday when gunmen on a motorbike opened fire near his house, a senior police official said.

Imtiaz Ahmad, a provincial spokesperson for the immunisation campaign, also confirmed the killing.

A faction of the Pakistani Taliban, Jamaat-ul-Ahrar, on Sunday claimed responsibility for the attack. In a statement, the group’s spokesperson Ehsanullah Ehsan vowed to carry out more attacks.

Opposition to all forms of inoculation grew after the CIA organised a fake vaccination drive to help track down al Qaeda’s former leader Osama Bin Laden in 2011.

Despite the attacks, the country hopes to be removed from the list of polio-endemic countries by 2018 by achieving its goal of no fresh cases for a year.