Construction on temple’s site to be stopped

Construction on temple’s site to be stopped 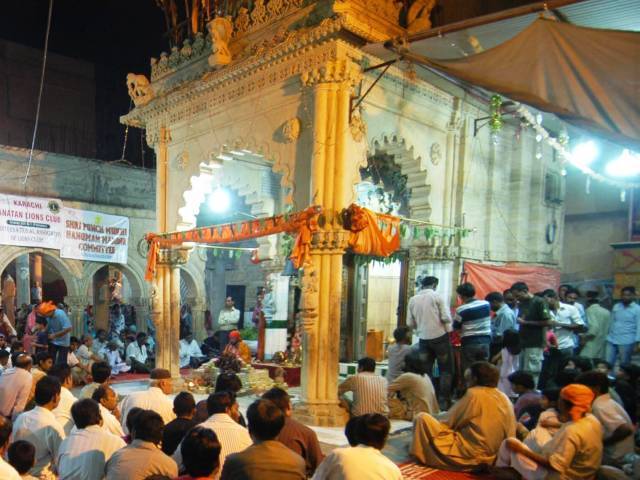 The court fixed September 29 as the date for further proceedings in the case and continued the stay order against construction and alteration on the building and site of the temple. PHOTO: MUHAMMAD NOMAN/EXPRESS

ABBOTABAD: A division bench of the Peshawar High Court has ordered the chief executive officer of Cantonment Board Abbottabad (CBA) on Friday to immediately stop construction on the site of a Hindu temple. The officer has also been asked to explain why the court’s previous stay order was not respected.

300-year-old mosque to be rebuilt on Hindu temple land

The single bench, headed by Justice Qalandar Ali Khan, heard the case on September 8, where the chief executive officer of CBA was summoned to appear in person and record his statement regarding the construction and alteration in the structure of Shiv temple, also known as Balmeek Shrine and Dsushara House.

But the officer failed to appear before the bench due to which the court issued a day’s notice to him, scheduling Friday as the day for him to appear before the court. However, according to Shabnam Nawaz, the respondent did not appear and sent a counsel on his behalf. The judge took notice of the officer’s attitude and asked his counsel to ensure he attended the court proceedings in person within 10 minutes. If he failed to do so, he would face criminal action.

On the court’s order CBA Chief Executive Officer Syed Farasat Ali Shah had to appear in person. The court asked him to forthwith stop whatever construction or changes were being made on the land and building of the temple and explain why the court’s order was not respected and who was responsible for carrying out construction on the temple’s land.

The court fixed September 29 as the date for further proceedings in the case and continued the stay order against construction and alteration on the building and site of the temple. Advocate Haji Muhammad Yousuf represented CBA in the court.

Lal filed a civil revision petition during April 2015 against the chief executive officer of CBA and others, requesting for stay order against the construction and alteration in the structure of Shiv temple. The petitioner said since Hindus have a designated place of worship within the city, they should be allowed to use it for religious purposes.

UAE decides to allot land for temple in Abu Dhabi

During the argument, the petitioners’ counsels had shared the documentary proof that supported the petition. The general land record and a survey report of CBA showed that there was Hindu temple situated for centuries on 4,200 square yards of land near PTCL’s building within the urban limits of Abbottabad.

The court had granted stay to the petitioner, barring the respondents from altering the space.

However, according to Zafar Iqbal, the respondents demolished some portions of the temple despite the stay order and constructed six housing units and a car park, besides using the remaining space for dumping solid waste.

The petitioner again approached the court with another petition. He requested for contempt of court proceedings against the respondents as he and his community members believed the respondents not only violated court orders, but also desecrated their place of worship.

A question of merit: PHC seeks replies on ‘illegal’ appointment of PDA DG