This woman aims to become the fattest in the world

This woman aims to become the fattest in the world 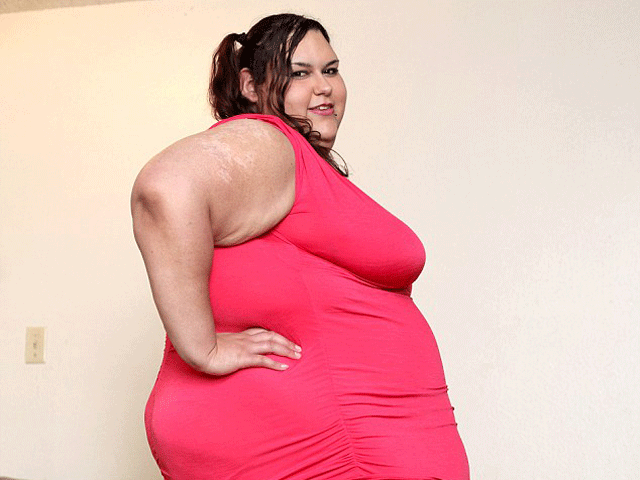 Monica Riley is on a record-breaking spree. PHOTO: DAILYMAIL

Monica Riley, a 700 kilogramme funnel-fed woman is on a record-breaking spree.

Riley, who is paid by men to gain more weight as she posts photos and videos of herself eating, is determined to become the fattest woman in the world, reports Fox News. “I have 20,000 online fans and they love to watch the funnel feeding – it’s a big hit,” she said.

Hailing from Fort Worth, Texas, this woman aims to hit 1,000 lbs in a bid to ultimately become immobile. With a 91-inch stomach, the 27-year-old is a model by profession on websites for big beautiful women.

Her 25-year-old boyfriend Sid Riley, who prepares meals for her, also feeds the woman through a funnel. “If I lay down after a big dinner he has to help me roll over because my belly is too full for me to roll — it’s a big turn-on for both of us.”

“It’s a sexual fantasy for us and we talk about it a lot. He already has to help me get off the sofa and get me out of bed.” Riley revealed.

The super-sized model — already dependent on her boyfriend — aims to be immobile one day.

“The plan is to reach 1,000 pounds and become immobile. I would feel like a queen because Sid would be waiting on me hand and foot and he’s excited about it too,” she said.

Monica is even looking forward to get a bed with a built-in toilet which Sid will need to empty, reports Dailymail. She has managed to maintain a size 38 by consuming over 8,000 calories every day.

Despite her health risks of being morbidly obese, the couple is trying to have a baby. Riley has miscarried twice so far.

Being overweight, obese cuts lifespan by one to 10 years: study

“We do plan to have children – there’s nothing to stop me raising a child from my bedroom,” she said. “We would get a nanny in to help around the house and take the baby out and about,” she added.