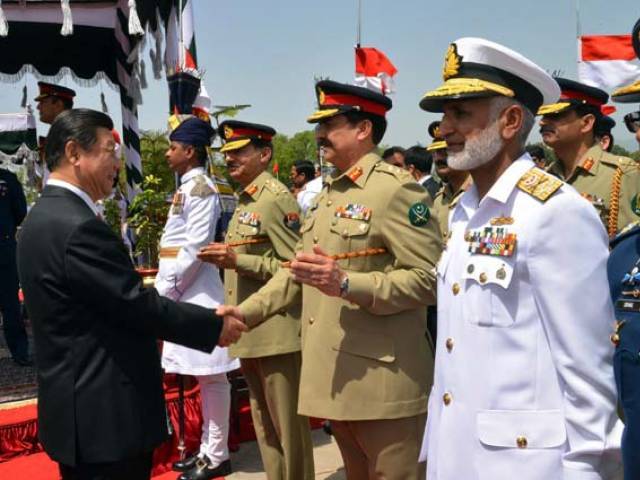 ISLAMABAD: Pakistan’s cabinet has given the go-ahead for negotiating a long-term defence agreement with China, according to documents available with The Express Tribune. The approval was given in a meeting chaired by Prime Minister Nawaz Sharif on July 15, 2016 at the Governor House in Lahore soon after his return from London.

The cabinet considered the summary to initiate negotiations on a draft agreement between Pakistan and China on a long-term strategic framework agreement for enhancing defence and security cooperation in diversified fields. The cabinet held detailed discussions on the proposed agreement before giving the nod of approval.

The cabinet was informed that the draft agreement was based on principles of mutual respect for each other’s territorial integrity, sovereignty, non-integration and non-interference in each other’s internal affairs, equality and cooperation for mutual benefits, and peaceful coexistence for strategic gains in defence and security, including arms and technology transfers.

The cabinet was informed that input from ministries of foreign affairs, interior and defence production as well as the Joint Staff Headquarters had been obtained and incorporated in the draft agreement which was subsequently vetted by the law and justice division.

In April 2015 when Chinese President Xi Jinping visited Pakistan, the two countries agreed that their relationship had acquired greater strategic significance against the backdrop of complex and changing international and regional situations. They agreed to elevate the Pakistan-China relationship to the all-weather strategic cooperative partnership.

Saturday’s disclosure came less than a week after the United States signed an agreement with Pakistan’s archrival India governing the use of each other’s land, air and naval bases for repair and resupply, a step towardsZ building defence ties as they sought to counter the growing maritime assertiveness of China.

Pakistan called the Logistics Exchange Memorandum of Agreement between the US and India as an agreement between the two sovereign states and hoped it would contribute to peace and stability. “Pakistan would like to see that such arrangements do not contribute to polarising the region by disturbing the strategic balance in South Asia and escalating the arms buildup,” Foreign Office spokesperson Nafees Zakaria told a news briefing on Thursday.

CPEC: Perils ahead for Pakistan

In 2011, the then prime minister, Yousaf Raza Gilani, expressed a desire to sign a defence deal with China during a trip to Beijing. At the time, the Chinese leadership advised Pakistan against such an agreement fearing that it might create a strain in Islamabad’s and Beijing’s relations with both Washington and New Delhi.

However, Foreign Secretary Aizaz Ahmed Chaudhry recently informed the Senate Standing Committee on Foreign Affairs and Defence that Pakistan’s growing strategic partnership with China was one of the main reasons behind the current strain in its ties with the United States. The United States was probably upset with the multibillion-dollar China-Pakistan Economic Corridor (CPEC) project, according to him.