Demands: JI to organise gathering of scholars on Sept 5

Demands: JI to organise gathering of scholars on Sept 5 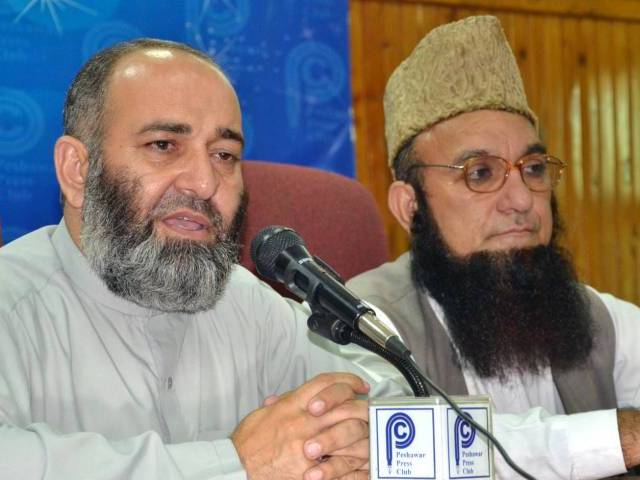 JI’s provincial chief said they would never allow those forces which were promoting secularism and liberalism in Pakistan. PHOTO: INP

PESHAWAR: Jamaat-e-Islami will organise a gathering of scholars on September 5 at Markaz-e-Islami in the city.

This was said by JI provincial chief Mushtaq Ahmad during a news conference at Peshawar Press Club.

“The event will be titled Dastar-e-Fazeelat on September 5,” Ahmad said.

He added thousands of scholars across the province will participate in the gathering and Jamaat-e-Islami chief Sirajul Haq would be the chief guest. On the occasion, Dastar-e-Fazeelat would be awarded religious leaders.

“Religious seminaries are in favour of registration process but the government should ease the process,” he said.

“Interest economics and un-Islamic banking systems are against the Constitution,” he said. “As a result, usury should be rooted out from the society and give preference to Islamic banking.”

He pressed the government to implement Islamic system under the Constitution.

“The constitution clearly defines the need to eradicate of social evils and promotion of social economic wellbeing,” he added.

JI’s provincial chief said they would never allow those forces which were promoting secularism and liberalism in Pakistan.

“JI will not compromise and accept syllabi at government educational institutions which are prepared by European NGOs,” he said.

“Those leaders whose names are in the Panama leaks should face the accountability. Corruption and Pakistan cannot run on the same track,” he said. He also urged the government to restore Friday as a weekly holiday.

Progress report: Free health care to be provided to patients with fatal diseases