The story of a pro-Pakistan village in Indian Kashmir

The story of a pro-Pakistan village in Indian Kashmir

Pakist­ani flags were raised in the villag­e on the night before August 14
By Murtaza Shibli
Published: September 2, 2016
Tweet Email 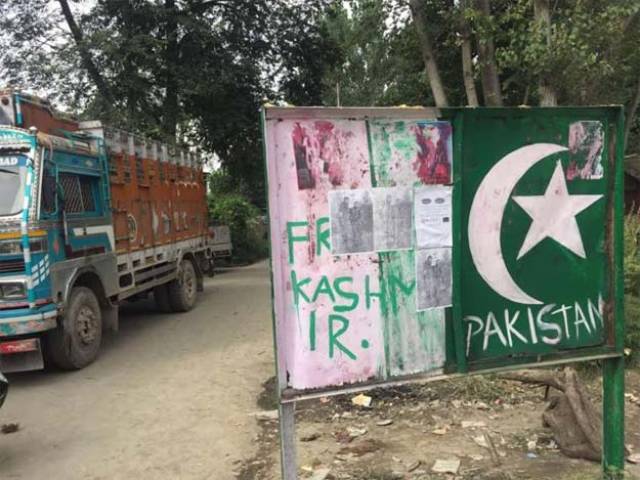 My ride ends just outside the main square in Veeri village, in Bijbehara, Kashmir. On the other side, a group of youngsters is sitting outside closed shops keeping an unceasing vigil on any movement into the village. In the middle of the square a huge tree trunk and a half-burnt tyre is bellowing smoke polluting the otherwise airy locale to afford us a sense of unease that hangs thick in the atmosphere.

I stop just a few yards before the smooth blacktop road is interrupted by several huge logs placed across it, and park the scooter in front of an already parked truck. To my left, a tin shed is painted a flagrant green. The signboard on its top says: ‘Friends Sumo Stand’.

A tiny silver padlock on the door signifies it is closed for business. As I head towards the square, the graffiti on the other side of the shed announces in bold white letters: ‘Kashmir banega Pakistan’. On the left, the roadside sign at the entrance of the square that once announced the directions and distances to nearby places has received a complete makeover. On its front side, the sign looks like a Pakistani flag; three-fourths of the space is covered by a massive white crescent and a star painted on green with ‘Pakistan’ written on the extreme edge of the green space that borders the vertical white rectangle on the left. The other side is evenly divided with the right half painted green with a large crescent and a star in white with the word ‘Pakistan’ written underneath it in amateurish but bold letters. The other half is adored by several A4 size posters of various militants that look slightly smudged and bleed into each other following a recent army raid during which they smeared some of the graffiti around the village. However, as soon as the army left, the youngsters painstakingly restored the expressions of their defiance. I could see the words ‘Free Kashmir’ in green, seemingly written in haste, and half covered by the posters. When I describe this scene to Dr Bashir Veeri, a legislator from the village representing the pro-India National Conference, he is not surprised. “Nobody in Kashmir is supporting India at the moment.” He blames the successive Indian governments for the mess and is bitter about the treatment of Kashmiris. “Kashmiris get differential treatment and that is the chief reason for their alienation. Nobody in India gets showered by pellets but we do. Despite dozens of murders of innocent Kashmiris, we only get threats from the Prime Minister Modi.”

As soon as I start taking photographs of the graffiti, a bunch of children raise pro-Pakistan and pro-azadi slogans. Within less than a minute a group of curious but angry looking youth gather around me. “What do you want,” one of them shouts. Ignoring his inquiry I shot back: “How is Rehman Veeri sahib?” A nearly 16 or 17 year old raises his head and shouts: “His time is gone. We have nothing to do with him.” “And what about the other Veeri, Dr Bashir” I ask. “They are all the same. We don’t want them here,” Everybody nods in agreement. Then a bearded man in his forties comes forward and says in a measured tone: “These pro-Indian politicians are all dogs with no morals. They are murderers. Look at Mehbooba Mufti. She used to cry for Kashmir but now she wants to kill us all. We need to get rid of them.”

Suddenly a couple of agitated youngsters come forward and ask me why I want to write about Veeri. I explain I am keen to get some firsthand knowledge about the current situation from here because Veeri has many well known pro-India faces, namely the current Roads and Buildings Minister from the ruling People’s Democratic Front (PDP) Abdul Rehman Veeri and National Conference legislator Dr Bashir Ahmed Veeri.

Miffed at my description, a youngster demands to see my ID while a man in his mid-thirties asks where I live. I show my ID and tell them I am from Bijbehara. Suddenly everyone starts shouting abuse at Mehbooba Mufti and the people of Bijbehara. For a while I am unable to say anything. Then I gather myself and retort in a measured and feeble voice: “But you are the guys who voted for Veeri and he is from your village.”

“Yes, but the real culprit is Mehbooba Mufti and the people from Bijbehara,” they replied. I smile but remain silent to stop the conversation going into a loop.

Slowly I walk towards the road on the left that leads to Nobugh, another village. I cast a glance at a small shop-like structure which is actually the local branch of the Jammu and Kashmir Bank. Its closed front has some unique graffiti; a well-known Kashmiri saying is slightly modified but badly transliterated in the Roman alphabet: ‘Aan Poash Talie Yalle Gun Posh’ (The food will last till the gun lasts). The actual saying is from Sheikh Nooruddin Noorani, patron saint of Kashmir: ‘Un poshei teali yeali wun poshei’, the food will last till the forests last. At the top, an acrylic signboard mentions J&K Bank with the tagline, serving to empower, and there are six A4-size posters pasted to the right, depicting militants, mostly in army fatigues and holding guns. The people present at the scene claim the whole village now supports the ‘tehreek’, pro-freedom resistance movement, and pledge no one will take part in any pro-India electoral exercise any more.

As I make a turn, I notice a Pakistani flag waving high atop a mobile phone tower. A youngster tells me another phone tower nearby that is hidden from the view also has a Pakistani flag. These and many other green flags with white crescents were raised on the night before August 14. The army raided the village on August 30 and smeared some graffiti and tried to remove the flags, but the villagers came out to resist.

“Our village never got involved in any militancy even during the ’90s. We had only two militants from Jammu and Kashmir Liberation Front who surrendered upon their return from Pakistan. Since then, our village has remained aloof from any such activities. We never faced army raids or crack downs, earning our village the name ‘hindustaen gaam’, an Indian village. But obviously things are changing,” says Dr Veeri.

While the mood of the youth is defiant and the graffiti across the village depicts an uncompromising demeanour, the youngsters remain on edge. They refuse to divulge their names and move away from the frame as I shoot photographs. “We know the Peoples Democratic Party is preparing lists of the youth to get them arrested,” said one of them. “But why are you afraid of being arrested,” I ask. A youth in his late teens with slightly gingery stubble comes forward, grabs me by the arm, and looks me in the eyes: “I do not want to waste my life in a prison. Instead, I would prefer to join the mujahedeen, roam free as long as my life allows, and then attain martyrdom like Burhan.”

No one in the audience objected to his proposed life choice.

Murtaza Shibli is a journalist, author and communications and security specialist. He lives between London, Lahore and Srinagar, Kashmir. Twitter: @murtaza_shibli