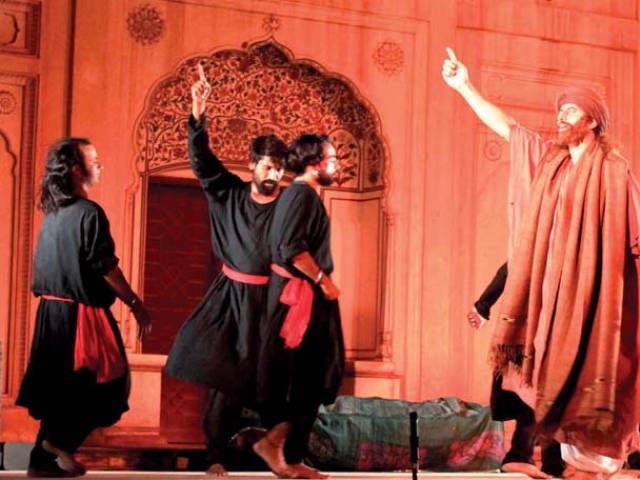 ISLAMABAD: Bulleh Shah’s role as a social reformer amid religious and political turmoil was portrayed in a play as part of activities to commemorate his Urs, on Monday.

The play “Bullah” by Ajoka Theater was staged at the Lok Virsa Museum, Anarkali Façade.

Written by Shahid Nadeem and directed by Madeeha Gauhar, the performance showed a glimpse of the life of Bulleh Shah.

Speaking to The Express Tribune, Nadeem said the play revolved around legendary poet’s life, work and struggle with religious orthodoxy some 300 years ago when Mughal Empire was crumbling.

Amid political, religious and ideological turbulence, Shah played the role of a social reformer through the message of peace, humanism and hope, he said.

“He spoke for the masses in their language and opposed the rulers who were exploiting the masses irrespective of their religion,” the writer said.

“He was in conflict with clergy and ruling Muslim elite of those times so this conflict between the sufi and the salafist or narrow-minded version of Islam is quiet relevant today,” Nadeem said.

He said that Shah propagated the message of peace and defiance of the orthodoxy, by teaching people to establish a relationship with God on the basis of love rather than fear.

“Bulleh Shah is a significant figure in Pakistani, sufi and South Asian history and there is a need to learn from his teachings,” Nadeem said.

Gauhar said “Bullah” was an iconic play of Ajoka and probably the most popular play in the sub-continent.

“We’ve been performing since 2001 as a tribute to Baba Bulleh Shah and his thought, which is need of the hour,” she said, while speaking to The Express Tribune.

Like all the sufis, Shah talked about tolerance, peace and love for humanity, which is so important in the country today, Gauhar said.

“He talked against fundamentalism in religion, which is something we need to think about since there are many different interpretations of religion,” the director said.

In her view, relevance of the play in today’s time was tremendous because Shah spoke against injustice, oppression and misuse of religion in his own time.

“He basically negated fundamentalism due to which he was exiled from his community and remained in conflict with religious and ruling establishment of his time,” she said.

His humanist philosophy is greatly needed today to tackle sectarianism and intolerance, the director remarked.