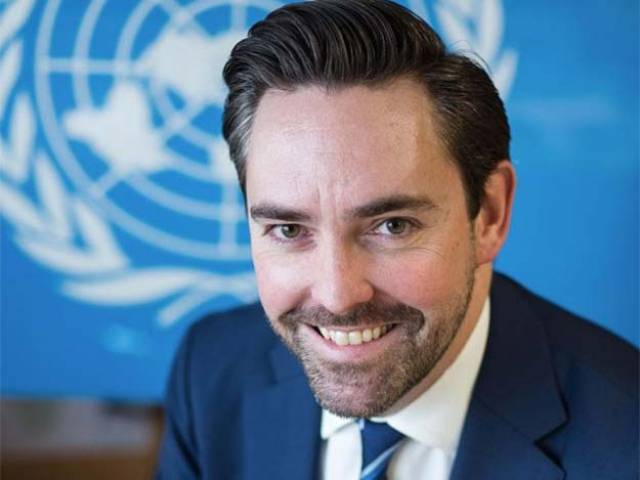 Franche says change can only happen in Pakistan if the elite will sacrifice their interest in favour of the nation PHOTO: Former UNDP Pakistan Director Marc-André Franche/TWITTER

In a scathing criticism of the Pakistani elite, the former director of United Nations Development Programme (UNDP) for Pakistan Marc-André Franche, said the only way a critical change could happen in the country was when the influential, the politicians and the wealthy, would sacrifice short term, individual and family interests for the benefit of the nation.

The former director, who spent four years in Pakistan, was also critical of the landowners. “I have visited some very large landowners, who have exploited the land for centuries, paid nearly zero money for the water, and how they almost sometimes hold people in bondage. And then they come to the United Nations or other agencies and ask us to invest in water, sanitation, and education for the people in their district. I find that quite embarrassing.”

Having visited Karachi this month, Franche was appalled to see the condition of the city. “It’s at a breaking a point. If Karachi is at all to continue being the engine of growth in this country, something needs to be done about public utilities. You cannot live in Karachi and grow your business anymore with the state of disrepair of public institutions.”

Further, he expressed his frustration that Pakistan was not making more progress in terms of poverty reduction, inequality, modernising the state, and functioning institutions. “The fact that even in 2016, Pakistan has 38 per cent poverty; it has districts that live like sub-Saharan Africa; that the basic human rights of minorities, women and the people of FATA are not respected; that this country has not been able to get its act together and hold a census; or that it has not been able to push for reforms in FATA, an area that is institutionally living in 17th century. It is extremely preoccupying.”

Bribery incidence in Pakistan much higher than rest of South Asia

“Pakistan will not be able to survive with gated communities where you are completely isolated from the societies, where you are creating ghettos at one end and big huge malls for the rich at the other end. It is not the kind of society you want your kids to live in,” he added.

Franche shared that he was disappointed with the quality of local government laws that each province had developed. “Only KP has a decent law that gives real power and real money to the local government. Local government does not mean that you just elect them and deny them fiscal resources or power. We have been advocating for a review of those laws. In KP, because they put in place a decent local government law, we are currently finalising the agreement with the provincial government to support them in local governance, focusing first on seven districts, one per each division.”

The ex-director of UNDP Pakistan was also critical of the media, adding that there was a deficit of media literacy. “The media is one of the pillars of democracy and the media has to educate the public. Unfortunately, the level of dependence of the government on military authorities, and the degree by which a lot of media in this country is manipulated by powerful sources, are sources of erosion of democracy and erosion of the institutions that are the foundations of this country.”

Although, he didn’t think there was an imminent threat of a revolt by the poor, he did see it happening eventually. “I don’t see those circumstances emerging in Pakistan at the moment. But it will eventually happen in one way or the other. You cannot have a country, where nearly 40 per cent of the people live in poverty.”

As he leaves Pakistan, he spoke about his love for the country. “When you spend four years in a country, you learn to appreciate its complexity. I do not even remember how many times I have been to Balochistan; I believe I have been to nearly every district in Khyber-Pakhtunkhwa; I have gone to the northern areas a number of times; and I have, of course, travelled in Punjab and Sindh. So I am leaving with a lot of admiration for Pakistan and its people. When you read the history of Pakistan, it was not obvious that this country would survive. There was a lot of criticism and people doubting that it will. Yet it has, and it has come very far and achieved a lot in many ways.”