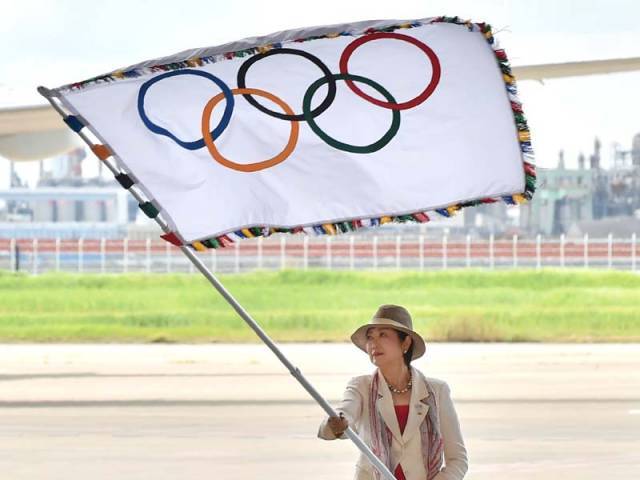 Tokyo governor Yuriko Koike carried the flag during a ceremony at Haneda airport after stepping off a plane from the Brazilian host city, accompanied by a delegation who picked up a record 41 medals in Rio. PHOTO: AFP

Tokyo governor Yuriko Koike carried the flag during a ceremony at Haneda airport after stepping off a plane from the Brazilian host city, accompanied by a delegation who picked up a record 41 medals in Rio.

“I feel the full weight of the responsibility that this (flag) brings,” Koike told the crowd. “I’m very happy that we’re able to bring the flag back after more than 50 years.”

Tokyo last hosted the summer Olympics in 1964, highlighting Japan’s post-war coming out party as it grew into a global economic powerhouse.

“I hope we can revive the same emotion we felt in Rio at the Tokyo Olympics,” said Saori Yoshida, a silver medallist wrestler and captain of the Rio delegation.

A kimono-clad Koike on Sunday received the flag at the closing ceremony in Rio where thousands of fans and athletes donned ponchos on a wet and windy night for a colourful festival of Brazilian culture and music with bursts of fireworks.

Japan’s Prime Minister Shinzo Abe made a comical cameo as Nintendo video game character Super Mario as Tokyo set a light-hearted tone for its hosting of the Games in four years.

Abe came out from a pipe after a video showed plumber Mario drilling down from Tokyo into the earth to reach Brazil.

“I wanted to show Japan’s soft power to the world with the help of Japanese characters,” Abe told reporters.

Argentina football team robbed in Mexico ahead of Rio Olympics

Japan sold itself as a safe pair of hands to host the event and Abe pledged in Rio he would try to make it the best Games yet.

But Tokyo’s Olympic preparations have suffered high-profile setbacks including soaring costs and having to redesign the Games logo after accusations of plagiarism.

French prosecutors have also launched an investigation into alleged bribes linked to Tokyo’s winning Olympic bid, which organisers have denied.