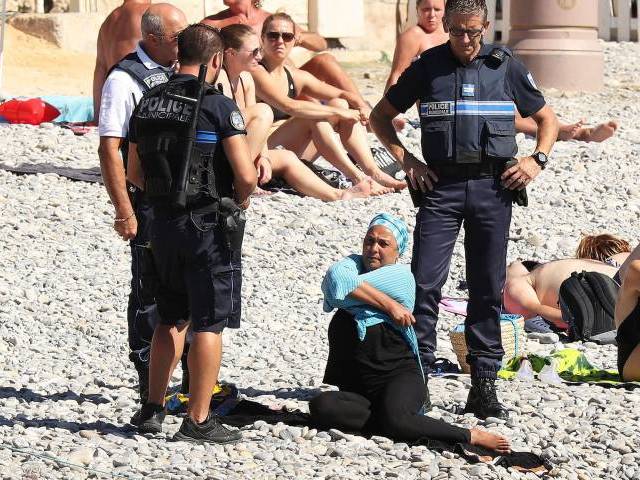 French police asked a woman on Tuesday to remove a ‘burkini’ on a packed Nice beach in connection with a divisive ban on the swimwear.

Photographs showing police confronting the woman have emerged. At least four police officers can be seen standing over a woman resting on the shore at Nice’s Promenade des Anglais, the sight of last month’s Bastille Day attack. After the police arrive, the woman can be seen removing a blue garment, as one of the officers appears to be taking notes. The photos emerged following similar confrontations in Cannes where ten burkini wearing Muslim women have been apprehended by police in the three weeks since the imposition of a temporary ban on the garment. Nice has become the latest French seaside resort to ban the burkini, an issue that has sparked heated debate in secular France. Using language similar to bans imposed in a string of other towns on the French Riviera, the city barred apparel that “overtly manifests adherence to a religion at a time when France and places of worship are the target of terrorist attacks”.

The wording of the ban in Nice refers specifically to last month’s Bastille Day attack that claimed 86 lives as well as the murder of a Catholic priest near the northern city of Rouen 12 days later. Besides Nice and Cannes 14 other towns in the southeast, as well as others elsewhere in France, have already banned the burkini.

Muslim siblings kicked off flight for ‘looking at IS propaganda’