Neymar steps down as Brazil's captain after clinching Olympic gold

Neymar steps down as Brazil's captain after clinching Olympic gold 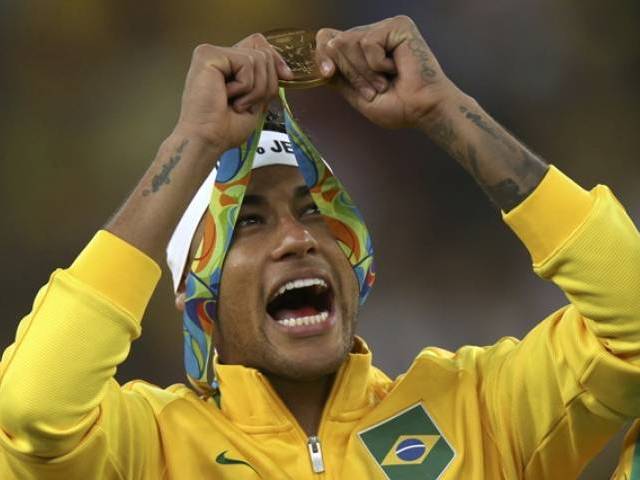 RIO DE JANEIRO: Barcelona star Neymar said he will step down as Brazil captain after leading the Olympic Games’ hosts to their first ever football gold medal.

“Today I have been proclaimed a champion and I hand over the armband as captain,” Neymar told SporTV after scoring the winning penalty in a 5-4 shootout win over Germany on Saturday.

“It was something I received with honour and love. It was an honour to be captain, but from today I am no longer captain.”

New coach of the Brazil senior side Tite will take charge of his first game in charge against Ecuador in World Cup 2018 qualifying on September 1 after Dunga was sacked following Brazil’s group stage exit from the Copa America.

“I send the message to Tite that from now he can look for another captain,” added Neymar.

Neymar captained the mainly under-23 side during the Games and Brazil’s Olympic coach Rogerio Micale described his decision to step down as “noble.”

“It was a noble gesture on Neymar’s part to leave it up to Tite,” said Micale.

“We had this discussion and it wasn’t public at the time before. I decided I wanted him to be captain, he was the best person to be captain for the team.

“He knows that, the team knows that, but I repeat it was a noble gesture on Neymar’s part to let Tite decide who will be the captain.

“It demonstrates maturity on Neymar’s part, he is a leader in the national team, he is dedicated. I finish this tournament with the best possible impressions of Neymar as does the team.”

Brazil through to semis as Neymar sparks win

The 24-year-old had missed that match having suffered two broken bones in his back towards the end of a bruising quarter-final clash with Colombia.

However, Neymar’s role as captain was questioned after he was sent-off in just his second competitive match in the role against Colombia at last year’s Copa America.

Neymar was also roundly criticised for his underwhelming displays in Brazil’s opening 0-0 draws against South Africa and Iraq.

However, he rounded on his critics after scoring not only Brazil’s winning penalty, but also a brilliant free-kick in the gold medal match.

“This is one of the best things that has happened in my life,” said Neymar. “Now they’ll (the critics) have to swallow what they said.”

That criticism melted away amidst chants of “ole, ole, ole Neymar” in front of the biggest crowd of the Games at the Maracana as Neymar led the hosts to a long-awaited gold.

He opened the scoring with a sensational first-half free-kick before Max Meyer’s equaliser sent the game into extra-time and eventually penalties.

However, Neymar was handed his moment to shine when Weverton saved Nils Petersen’s spot-kick and he kept his cool to fire into the top corner before sinking to his knees in tears.