Jayawardene told Nasser to look out for this Pakistani batsman

Jayawardene told Nasser to look out for this Pakistani batsman 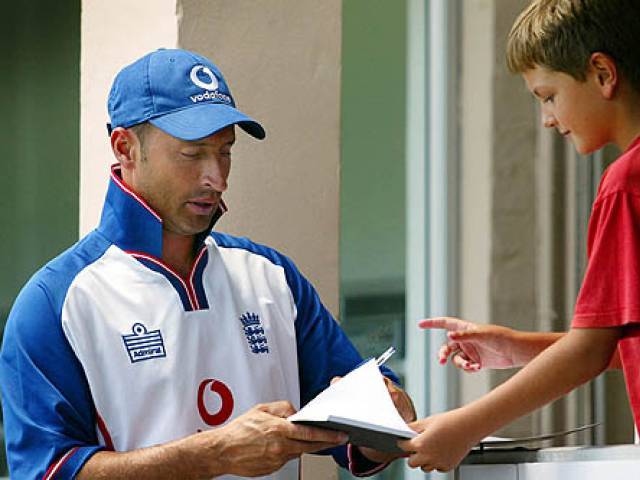 Former England captain Nasser Hussain on Friday revealed that Pakistani Asad Shafiq was the batsman former Sri Lankan captain Mahela Jayawardene told him to look out for during the four-match Test series.

Pakistan won the last Test at The Oval to level the series 2-2 against England and Shafiq scored a hundred at number four after bagging a pair at Edgbaston.

I dedicate my century to Hanif Mohammad: Asad Shafiq

“I spoke with Jayawardene before the series and asked him who I should look out for in the Pakistan line-up,” said Nasser. “He said one of their best players is Shafiq and when someone like Jayawardene talks about a player in that way then you’d better listen.”

Nasser also praised Shafiq’s mental toughness. “Apart from anything else, I thought that the true magnitude of his comeback innings at The Oval only became apparent in the context of his performance in the Edgbaston Test where he bagged a pair,” he said. “His reward for that failure was to be moved up the order. To go on then and get a hundred after a pair showed how mentally tough he is. I watched him bat in the nets at The Oval on the first morning and he did not look like someone who had just bagged a pair recently as he absolutely smashed it everywhere.”

The 48-year-old said he was pleased to see Shafiq perform well in the series. “As for Asad, I am pleased to see him do well and there were a lot of good things to come out of his batting in the Test series,” he said.

“He did impress me and he looked composed,” said Nasser. “It was his first Test in England… to show such composure and calmness at the crease against a good bowling attack which included [James] Anderson, [Stuart] Broad, [Chris] Woakes and [Steven] Finn was exceptional. Apart from his composure under pressure conditions, I was particularly impressed with the way he left the ball as well.”

Nasser suggested that the 20-year-old should try to bag a county contract. “Sami has got to play for Pakistan and also try and get himself a county contract so he can get used to conditions in England and to play around the world,” he said.

Misbah is father-figure to players

Former right-hand English batsman believes Pakistan captain Misbahul Haq is like a father-figure for the team as everyone looks up to him.

“He’s a father-figure to the players,” said Nasser. “When he speaks in the dressing room, the players listen. He is someone they all look up to and admire and he does give them the freedom to be fiery at times as we saw when he let [Mohammad] Amir and Wahab [Riaz] get stuck into the opposition and bowl fast and hostile spells. However, we also saw another side of his leadership at the Edgbaston Test on the fourth day when he put forward a plan and the bowlers sat in and bowled a consistent line and listened to his instructions with full attention.”

And how long does Nasser want Misbah to play? Well, as long as he can.

“I’d like him to carry on playing as long as possible,” he said. “I spoke to him the other day at The Oval and I said you are a long-time retired. I suppose if the result with India and West Indies goes in Pakistan’s favour and they go to number one in the world, then there is a good opportunity for him to go out right at the top; winning his last Test as captain, captaining well and taking Pakistan to number one. That would be an ideal opportunity for him to go out at the top, but I would like him to carry on for a long time.”

“I think he has been a calming influence on the team and his captaincy has been excellent, especially given the circumstances of not being able to play at home and constantly being on the road whilst playing in front of empty stands in the UAE,” he said. “I think what he has done for Pakistan cricket is amazing and long may it continue.”

Nasser Hussain was interviewed by PakPassion