In pictures: Married at 14

In pictures: Married at 14

We look at a series of pictur­es captur­ing the events leadin­g to this teen's weddin­g in Gaza
By Multimedia Desk / Reuters
Published: August 23, 2016
Tweet Email 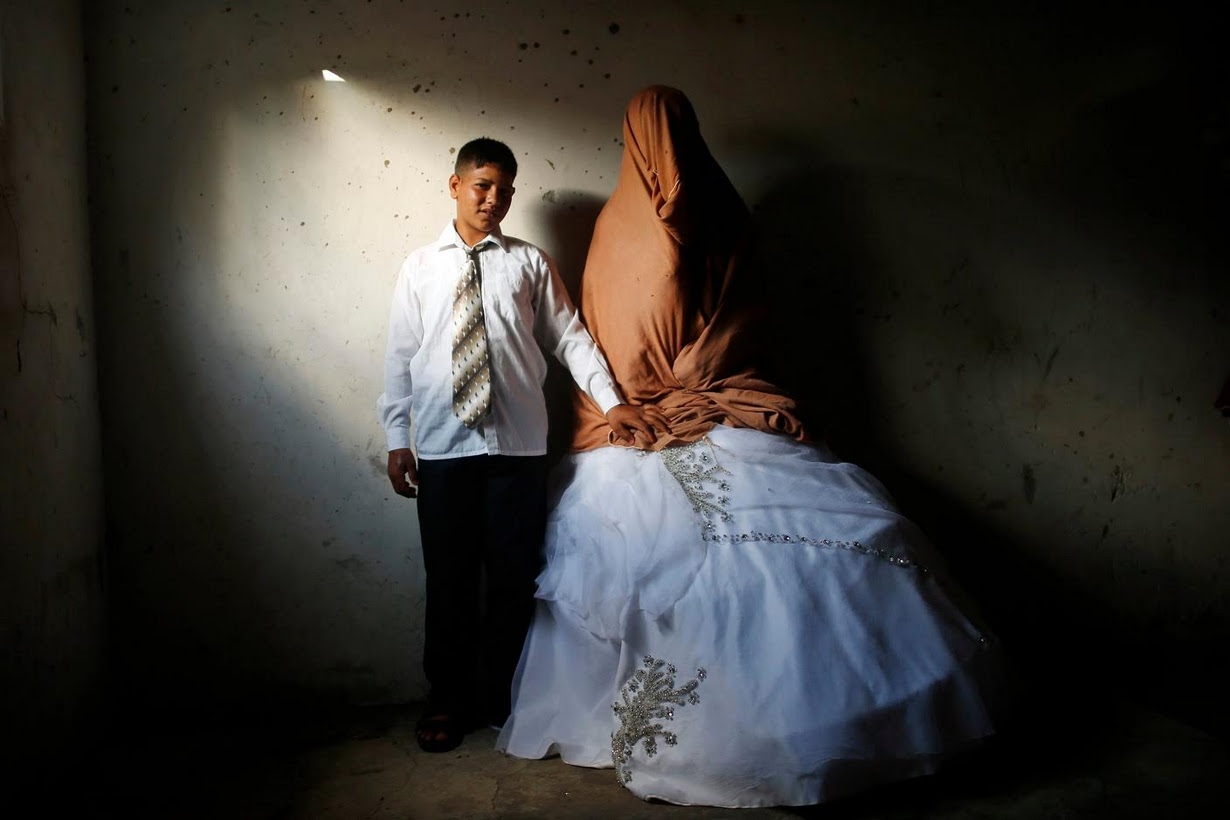 Young Palestinian groom Ahmed Soboh, 15, and his bride Tala, 14, stand inside Tala's house during their wedding party in the town of Beit Lahiya, near the border between Israel and the northern Gaza Strip. PHOTO: REUTERS

When Mohammed Saleem got a phone call from a friend asking if he wanted to photograph a wedding in Gaza, he said he wasn’t interested. But when he was told the groom was only 15 years old and the bride a year younger, he rushed to the location immediately.

After arriving I saw people celebrating in the street not far from the border between Israel and the northern Gaza Strip. Among them was a young Palestinian boy being carried on the shoulders of relatives and friends. I couldn’t believe that the boy was the groom until I asked him and he replied with a smile, “yes I am.”

After he finished celebrating at a party held a day before the official wedding, he went to play with friends in the street where they enjoyed flavoured frozen drinks.

The second day I went back and continued covering the story, the official wedding was to take place that day. I was surprised when I saw the groom’s mother helping him put on his wedding suit. I couldn’t avoid thinking that it looked as if she was dressing him for school. After that he started combing his hair using a broken piece of a mirror. I realised how poor the family was when I noticed that him and his wife share the three room house with the rest of the family, another nine people.

I asked the young groom if I could go with him into the house where the bride was getting prepared. When we entered the house, which was only next door, I realised that the family had not yet repaired the damage that was caused from an Israeli strike in 2009. When young Soboh looked at his bride and saw she was veiled, his face became frank and serious. At that moment the bride spoke to her groom and said, “lets smile and have our photo taken.” One thing she forgot to do before posing for the photograph was to remove her veil.

Here we look at a series of pictures capturing the events leading to this teen’s wedding in Gaza. Ahmed kisses his future father-in-law a day before his wedding. PHOTO: MOHAMMED SALEEM/REUTERS He is welcomed by his relatives a day before his marriage. PHOTO: MOHAMMED SALEEM/REUTERS The groom’s mother adjusts his tie as he gets ready for the nuptials. PHOTO: MOHAMMED SALEEM/REUTERS He sits on a motorcycle as he waits for the wedding. PHOTO: MOHAMMED SALEEM/REUTERS The newly married couple pose for a photograph two days after their wedding. PHOTO: MOHAMMED SALEEM/REUTERS Tala dresses herself as Ahmed is reflected in a mirror. PHOTO: MOHAMMED SALEEM/REUTERS The newlyweds ride a donkey cart on their way to Gaza’s beach. PHOTO: MOHAMMED SALEEM/REUTERS