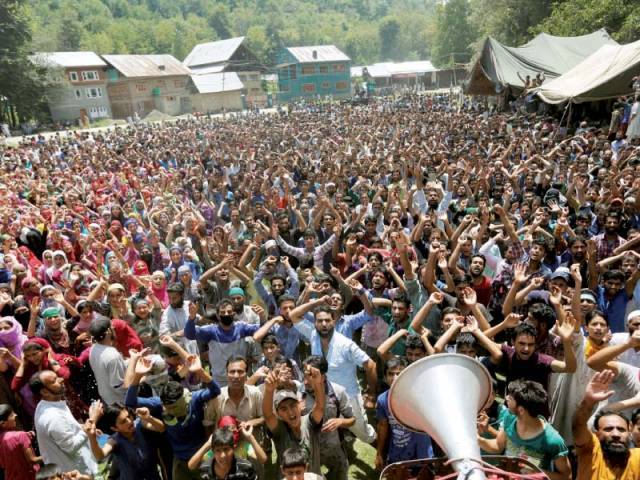 Kashmiri villagers shout slogans during a funeral of civilians, who according to local media were killed during clashes between police and protesters, in Beerwah, north of Srinagar. PHOTO: REUTERS

A security official confirmed the incident.

Amnesty denied Tuesday its staff made anti-nationalist comments at one of its events after the rights group was slapped with sedition charges.

Police in the southern Indian city of Bangalore filed initial charges against Amnesty International’s local chapter on Monday following complaints that participants called for independence of Indian-controlled Kashmir. The rights group, however, rejected the charges.

“No Amnesty International India employee shouted any slogans at any point,” the group said in a statement on Saturday’s event in Bangalore.

The complaints were lodged with police by a Hindu nationalist student organisation, some 200 of whose members had also staged protests outside Amnesty’s offices in Bangalore.

Bangalore police said they are studying footage of the event to identify those who shouted “anti-India” slogans. In an earlier statement, Amnesty said police had been invited to monitor Saturday’s event.

“The filing of a complaint against us now, and the registration of a case of sedition, shows a lack of belief in fundamental rights and freedoms in India,” Amnesty International India chief Aakar Patel said.