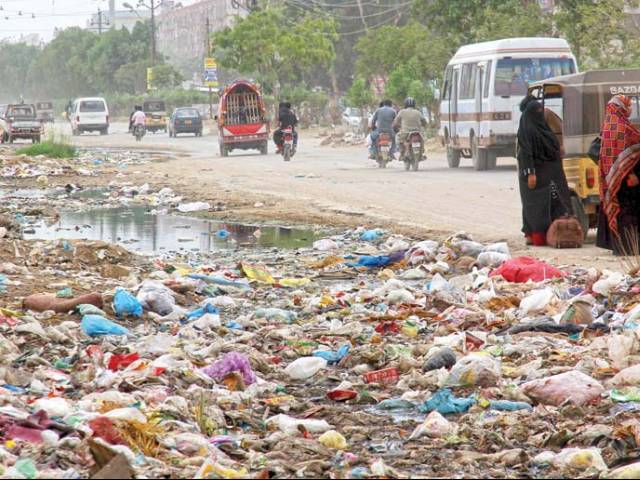 Apart from the daily traffic of students of six universities and residents of Malir, Saadi Town and Gulistan-e-Jauhar, overflowing gutters and leakage of waterlines leads to severe gridlocks every day. PHOTO: ATHAR KHAN/EXPRESS

KARACHI: Several empty promises and unaccountable deadlines given by the Sindh government since the last two years have failed to improve the poor condition of University Road, one of the city’s main arteries.

In January this year, when then Sindh chief minister Qaim Ali Shah visited various areas of the city, he expressed displeasure over the condition of University Road, giving a two-week deadline to the municipal authorities to repair it. However, the authorities failed to meet the deadline.

After the recent spell of monsoon rains, the road’s condition has further deteriorated. The rainwater that has accumulated in the ditches has worsened the situation because of which it has become impossible for commuters to use the road. “Only trucks such as 16-wheelers or jeeps can run on University Road now,” said Fakhra, a resident of Gulistan-e-Jauhar, adding that she stopped using the road as she believes it is better to ride a rollercoaster than driving through those huge ditches.

Anam Abidi, a student of KU, was of the opinion that the Sindh government is ignoring one of the main thoroughfares of the city, even though so many educational institutions are situated on this road and approximately hundreds and thousands of students travel on it every day.

Apart from the students, the entire population of Malir district, Saadi Town and Gulistan-e-Jauhar uses University Road to reach any main part of the city. On condition of anonymity, a traffic police constable, who was on duty near Samama Shopping Mall, said the University Road is wide enough to accommodate the daily traffic. However, the overflowing gutters and leakage of Karachi Water and Sewerage Board’s (KWSB) waterlines lead to severe traffic jams, he added. Due to this reason, he said, the road is in a poor condition and the government’s apathy has further deteriorated its state, especially at Safoora Chowragi.

KMC to repair it

Ironically, Karachi Metropolitan Corporation’s (KMC) office is also located on the University Road, inside the Civic Centre. According to KMC superintendent engineer Sami Khan, a PC-1 (initial development plan) is being prepared to repair the road on a ‘war-footing’.

Talking to The Express Tribune, he the road’s total length is about eight kilometres and they will construct it in two phases – first from Hassan Square to Nipa and then from NED University to Safoora Chowrangi. The construction work, he said, will include rehabilitation of both tracks along with streetlights and proper rainwater drains.

“Service roads from Hassan Square till Nipa will also be reconstructed,” he said. Khan added that the tendering process will kick off from next month and if all goes well the construction work will start by October.

He explained that the KWSB’s sewerage and water lines are not included in the project, however, according to him, the sewerage lines will be linked to the drains constructed by the KMC so the water does not over flow on the roads.

Due to the construction of the Red Line Bus Rapid Transit (BRT) – which will pass through the University Road – chances are that the millions of rupees KMC plans to spend to repair the passage will go down the drain.

Responding to this, KMC’s Sami Khan said that according to his information, the Red Line BRT is not coming to University Road anytime soon. However, he pointed out that they are in coordination with the transport department and if the Red Line’s construction is supposed to kick off soon they would have its provision in their construction work.

Meanwhile, transport director general Asadullah Shah said the Red Line BRT scheme has been approved and after it’s detailed designing by the Asian Development Bank, the construction would kick off in a year.