With season 9 around the corner, we look back at the bigges­t hits the show has belted out so far
By Ali Raj / Rafay Mahmood
Published: August 12, 2016
Tweet Email 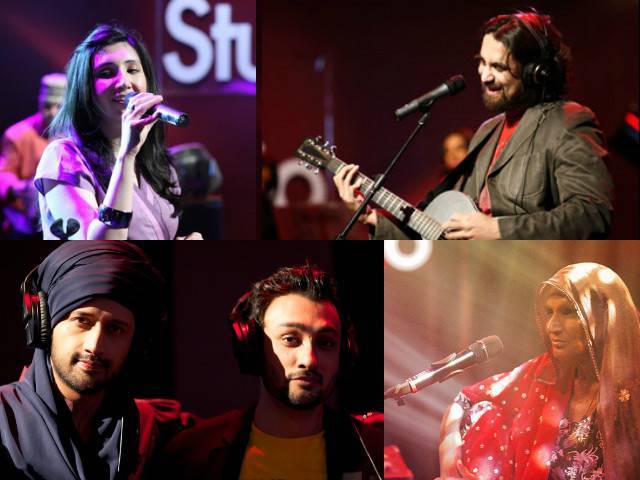 With season 9 around the corner, we look back at the biggest hits the show has belted out so far.

KARACHI: With the ninth edition of Coke Studio around the corner, The Express Tribune looks back at the biggest hits the show has belted out, over the years.

There’s hardly a Coke Studio song from this duo that did not click with the audiences. Season 6’s Laili Jaan is a Darri hit, originally done by Ahmed Zahir, that blurs boundaries with incredible ease.

Koi Labda from Season 5 is warm and extremely fulfilling. This is one collaboration from the show wherein everything fell perfectly in place.

While there aren’t many songs from the Strings era that make it to our list; Kadi Aao Ni from Season 8 is one that does deserve a spot. Mai Dhai shines in all her glory as we see glimpses of the Atif Aslam of Jalpari.

Laila O Laila was part of Season 6 that saw Rohail Hyatt bring in foreign musicians and eventually step down as the show’s producer. Not that we saw too many on the show, Laila O Laila was perhaps Coke Studio’s best rendition of a Balochi tune.

With this tribute to Ustad Muhammad Juman from Season 2, Ali Zafar completed a successful experiment with a very different singing style. The Flamenco chord progression is an absolute treat.

Pop icon Sajjad Ali made his Coke Studio debut in Season 4 and gave us his signature product – an all-out entertainer; the show had not exactly had an upbeat number to offer before this.

Kuch Hai is powerful, haunting and captivating. Season 4 showed the world why Faraz Anwar fans call him a guitar maestro.

This Strings original is one of the best pop compositions to come out from Pakistan and is still as popular as it was in 1992. This Season 1 song is an early example of what Rohail Hyatt had set about to master.

Qayaas were one of Pakistan’s most promising acts and Charkha Nolakha only reminds us what we have lost with their breakup. This ode to Ustad Nusrat Fateh Ali Khan and Led Zeppelin from Season 5 is one of the show’s best-arranged songs.

Attaullah Khan Esakhelvi graced Coke Studio in Season 4 and gave us a love song to remember. Jaffer Zaidi’s piano and accordion; Amir Azhar’s mandolin and Essakhelvi’s supplementary recital of a nazm stand out in this heartwarming number.

This Season 2 song saw Noori delve into devotional music for the first time ever and come up with one of the most memorable songs from the show. Saieen Zahoor’s distinct tone, Ali Hamza’s banjo and Ali Noor’s impressive vocal range make this a sure-shot winner.

Kangna, in Season 4, saw Coke Studio engage with authentic qawwals and qawwali for the first time. A composition in Raag Malkauns, Kangna is yet another achievement of the Rohail Hyatt era.

While Javed Bashir’s unmatched vocal prowess had already begun to gain attention long before this song came out, Season 2’s Aj Latha Naeeo announced his arrival and upped the ante of a show that was still establishing itself.

Saari Raat from Season 2 is arguably the finest Coke Studio has ever produced. A textbook example of how fusion music can work wonders.