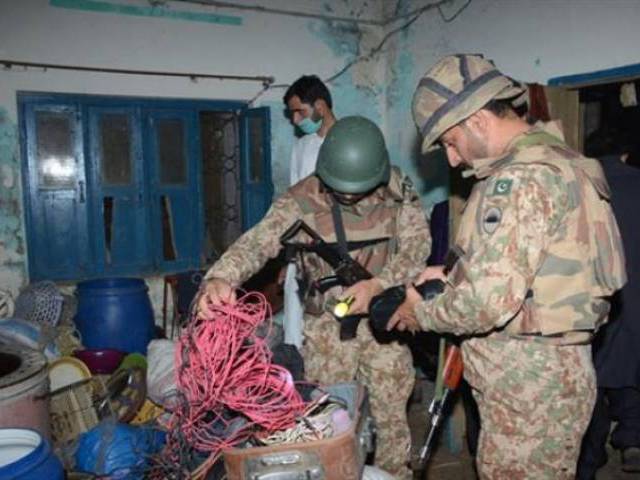 “The combing operations were carried out last night to nab terrorists in Kallar Sayedan and Gujar Khan areas of Rawalpindi district,” said a statement issued by the military’s media wing on Friday.

Combing operation was carried out last night to nab terrorists in Kallar Sayedan and Gujar Khan areas of… https://t.co/to15t8ctDD

The army further claimed to have recovered a huge cache of arms and ammunition, including improvised explosive devices (IEDs), from the possession of the arrested accused. The army on Wednesday launched combing operations in the suburbs of Quetta three days after a suicide bombing killed 74 people, mostly lawyers, at the city’s Civil Hospital.

The ISPR, however, did not provide details of the operations which were ordered by Army chief General Raheel Sharif during a high-level security meeting in Quetta. The decision was taken during an emergency security meeting chaired by the army chief at Pakistan Army’s Balochistan Corps Headquarters on Monday.

Earlier on Wednesday, law enforcers rounded up nearly two dozen suspects in raids in different neighbourhoods of Quetta. “Some of the 20 suspects have links with banned groups,” a police official told The Express Tribune. “We are interrogating them for any possible link to Monday’s bombing.”

Cellular services to remain suspended in Islamabad on Independence Day