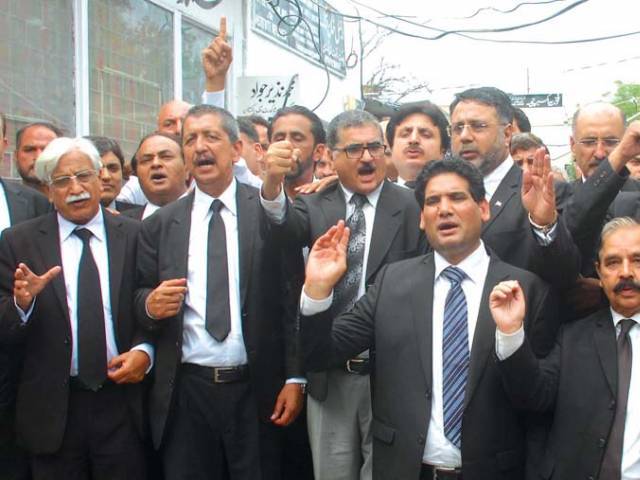 Lawyers chant slogans during a protest rally organised against the Quetta carnage, at the district courts in Islamabad on Tuesday. PHOTO: MUHAMMAD JAVAID/ EXPRESS

ISLAMABAD/ RAWALPINDI: Activists, lawyers and political workers on Tuesday called for countering the extremist thought by reforming the curricula to end terrorism in Pakistan.

Dozens of activists of the Awami Workers Party (AWP), the National Party (NP) and members of journalists and lawyers’ bodies gathered outside the National Press Club on Tuesday to condemn the Quetta carnage that left at least 70 people dead on Monday.

The activists said instead of blaming others for the violence, there was a need to fight the extremist mindset of a section of the country’s population.

They also pressed upon the government to provide security to the public, especially the vulnerable sections.

The AWP (Punjab) President, Asim Sajjad Akhtar, questioned the trend of blaming others for violence in Pakistan.

He said, “for finding a solution to the problem, we first needed to accept that a particular mindset was the reason for the bloodshed in the country.”

Akhtar said that that particular mindset was being nurtured in many of the education institutes in the country.

The protesters held placards with calls for reforming the curricula and questions about the country’s counter-terrorism policy.

“Change the curriculum which encourages extremism,” read a placard.

Another read: “After billions of taxpayers’ money into the war on terror, the people still bleed.”

“It is time to undertake long-term political steps to uproot the foundational basis of terrorism, including substantive curriculum reform, establishing friendly relations with neighbouring countries, nationalisation of madrassas, ending the interference of Gulf states in Pakistan’s internal affairs, and clamping down on hate speech in the media,” the AWP Islamabad Secretary, Nusrat Hussain, was quoted as saying in a statement issued by the party.

Ismat Shahjahan, another AWP leader, said the military was still unable to prevent the slaughter of people of Balochistan despite the sweeping powers it had in the province.

Journalists’ bodies such as the Islamabad Court and the Crime Reporters’ Association (ICCRA) also held a demonstration to show solidarity with the victims of Quetta carnage, which also included two television cameramen.

The speakers called for an end to impunity for violence against journalists.

The NPC President, Shakeel Anjum, emphasised the need for a proactive approach and measures to avoid attacks against journalists instead of mere issuing statements.

Former NPC president Shahryar Khan called upon the government to go beyond mere condemnation statement when it came to the protection of the media persons.

Television journalist Hamid Mir said that there was an effort by both the state and non-state actors to suppress the voice of the media. “It is not the first incident. Mere protests are no solution … there is a need for a permanent solution to this issue,” said Mir.

Afzal Butt, who head one of the two factions of the Pakistan Federal Union of Journalists, lamented that while media organisations get their cameras insured, they do not, the cameramen.

He said media managers and owners who send their teams to cover conflicts or violent incidents without proper training and life-saving equipment should also be held accountable for the death of journalists.

Meanwhile, lawyers in Islamabad, Rawalpindi and across the Potohar regions observed complete strike and boycotted court proceedings in protest against the Quetta carnage on Tuesday.

A general body meeting of the IBA was held at the Shuhada Hall at F-8 district courts.

Supreme Court Bar Association (SCBA) President Ali Zafar, while addressing the meeting called upon the government to provide security to all of its citizens, particularly soft targets such as schools, hospitals, markets and courts.

The lawyers also offered funeral prayers for the victims of the Quetta killings in absentia.

The lawyers’ bodies also called upon the government to increase security at all court premises across Pakistan.

Meanwhile, the lawyers observed complete strike in Rawalpindi in protest against killings in Quetta.

The district bar had announced three days of mourning and the lawyers would not appear in the courts for three days.

LHCBAR President Advocate Mujeebur Rehman Kayani said that August 8th blast in Quetta was a horrible incident and the main target of the terrorists was lawyers.

A meeting regarding security of the courts was called by the District and Sessions Judge Bahadur Ali Khan.

The bar representatives in the meeting pointed out shortcomings in the security measures for the lawyers and litigants alike in the court premises.

DBA President Shaukat Rauf Siddiqui said that the lawyers were upset by the inaction of the security agencies.