Review: Shallow is a mild word for this movie

Review: Shallow is a mild word for this movie

The movie doesn’t bring anythi­ng new to the table but does offer some suspen­se once it finall­y gets going
By Sameen Amer
Published: August 9, 2016
Tweet Email 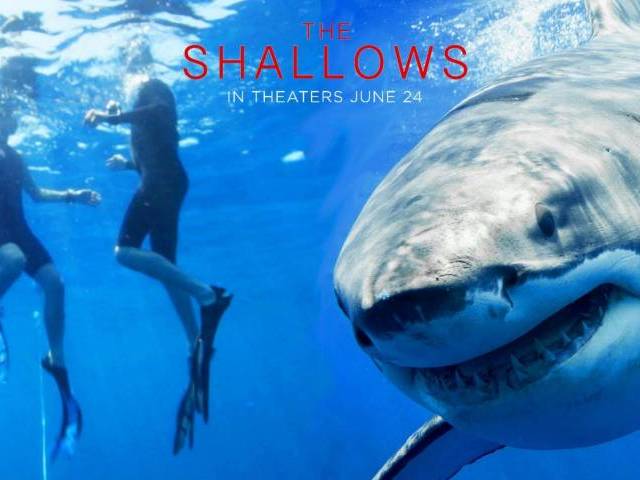 Hollywood’s fondness for revisiting familiar territories once again takes us to shark-infested waters in The Shallows, a survival thriller that doesn’t bring anything new to the table but does offer some suspense once it finally gets going.

The protagonist is Nancy Adams (Blake Lively), a medical student who makes her way to the same secret, secluded beach in Mexico that her late mother once visited. The American meets a couple of locals, and after surfing for a while, notices a whale carcass floating near her. As she catches the next wave, a shark bumps into her surfboard, knocks her into the water, and bites her leg. Alone and injured, Nancy manages to make her way to a small rock and tries to MacGyver her way out of her predicament, but her great white nemesis refuses to leave and menacingly circles her tiny outpost. Nancy must figure out how to make the short but dangerous journey to the shore by somehow beating the predator, and then get to safety.

The movie’s primary concern isn’t realism; how things unfold, especially towards the end, isn’t entirely plausible, but director Jaume Collet-Serra does, more or less, succeed in his mission of creating a gripping (albeit uneven) thriller. The Shallows loses some of its intensity because of its slow pace, especially when it starts to feel like the writers are struggling in their attempts to turn this tale into a full length film and stretching the plot a bit too thin in the process. You have to first watch Nancy doling out her ham-fisted back-story, even though her character didn’t need the background baggage to be more compelling; the proceedings would have been more intense had they just relied on the primal horror of her situation. Then you have to see her wading and surfing, waiting for something interesting to actually happen. But once the immense (although seemingly a tad inconsistent in size) shark surfaces, the film-makers successfully build the tension and amp up the suspense.

Lively remains at the centre of the adventure and carries the entire film by delivering a commanding, athletic performance, as she surfs, swims, screams, and grimaces for much of the movie’s one-and-a-half hour running time. Her main (and very charming) co-star is Stephen Seagull, a wounded bird that lands on the reef beside her, becoming her version of Wilson the volleyball and quickly turning into the only truly memorable element of the project.

Ultimately, The Shallows doesn’t bring anything new to the survival thriller genre. Once it finally kicks into gear, the movie does take you on a gripping, engaging ride, although, as with most such films, your enjoyment of the proceedings requires a fair amount of suspension of disbelief. While the movie can’t quite sustain the tension during its entire length, The Shallows does benefit from competent direction, beautiful cinematography and a (surprisingly) strong performance by its lead actress.