Climate change: Metallic pollution in sea on the rise

Climate change: Metallic pollution in sea on the rise 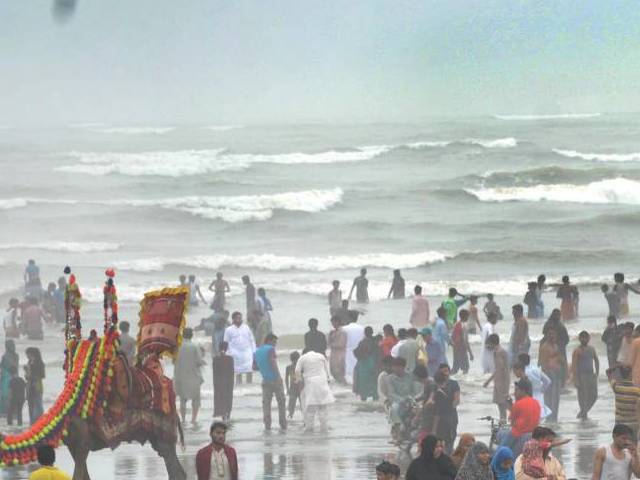 According to Prof Qari, fish and other organisms that adapt themselves to a specific temperature range can be killed by an abrupt change in water temperature, whether it is a rapid increase or decrease. This is known as thermal shock. PHOTO: MOHAMMAD NOMAN/EXPRESS

KARACHI: Metallic pollution seems to have risen over the years as the highest concentrations of heavy metals in green mussels were observed in 2012, according to a study.

The comparative study for 2012 and 1993 was conducted by the Institute of Marine Sciences (IMS), Karachi University. Green mussels were used in the study for identification of metal as they have the ability to accumulate pollutants in their tissues and are also easy to sample for identification.

Karachi’s coastal waters are known to be heavily polluted by metals, owing to the discharge of partial or untreated domestic and industrial waste directly into the sea. The main sources of metal pollutants include tanneries, shipping sources and other runoffs that are flushed directly into the waters.

To gauge the accumulation of metallic content in Karachi’s coastal waters, two comparative studies in 1993 and 2012 were conducted by the IMS. For this, green mussels, having scientific name P.Viridis, were sampled from Manora in both the years for a good comparison in different periods.

“The data of 1993 was present at the institute and we wanted to update our findings with the water’s condition in the current times,” explained Prof Rashida Qari of the IMS, who was part of this study.

During both the years, two different sizes of green mussels, 4 centimetre (cm) – 6cm and 6cm – 8cm, were collected. The samples were brought to the lab and carefully cleaned of mud debris, after which a chemical treatment was conducted to determine the properties of metal present.

As per the findings of the study, the highest concentrations of heavy metals were observed in 2012 as compared to 1993.

Green mussels were used as they have the ability to accumulate pollutants in their tissues and are also easy to sample for identification.

The results revealed the presence of heavy metals in the soft tissues of green mussels. Iron was found in the highest amounts, followed by lead, zinc and copper.

“The present probe of metal variation was recorded in two seasons, that is, summer (April – September) and winter (October – March),” says the study. “The highest value of iron was measured in the month of December, 2012, and the lowest in June, 1993. Moreover, maximum concentrations of lead were measured in March, 2012, while a minimum level was recorded in July, 1993.”

Generally, the metal concentrations increased in winter and decreased in summer. The study describes this phenomenon as related to the reproductive and weight fluctuations of these organisms in both the seasons.

The month of May brought along a little surprise for Karachiites as seashells, amounting to millions, were seen strewn across the seashore. It brought mixed responses from both experts and coast guards — some claimed it was a regular feature while others thought of it as an unusual occurrence.

While metallic pollution is a reason that is also backed by research, Prof Qari was of the view that high presence of mussels on the shore can also be attributed to a rise in the sea temperature. “A common cause of thermal pollution is the use of water as a coolant by power plants and industries,” she said. “When the water used as coolant is returned to the natural environment at a higher temperature, the supply of oxygen decreases. The change in temperature also affects the ecosystem composition.”

According to Prof Qari, fish and other organisms that adapt themselves to a specific temperature range can be killed by an abrupt change in water temperature, whether it is a rapid increase or decrease. This is known as thermal shock. “Temperature changes of even one to two degree centigrade can cause significant changes in organism metabolism and other adverse cellular effects,” she explained. “These cellular level effects can adversely affect mortality and reproduction.” According to her, there is a high possibility that the Karachi coast is facing the same issue.