Blacklisted US ‘spy’ arrested in Islamabad

Blacklisted US ‘spy’ arrested in Islamabad 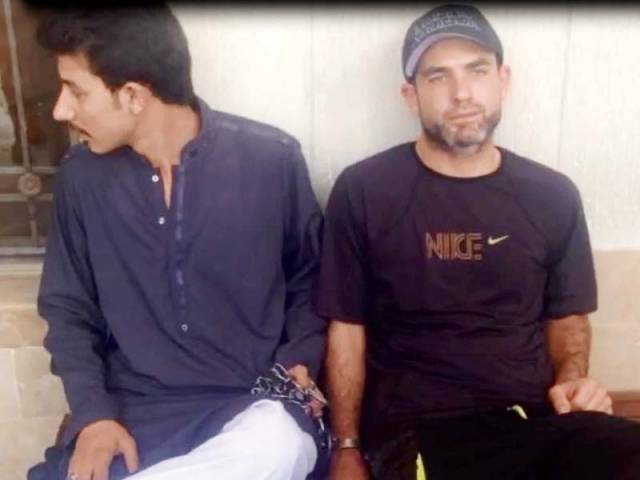 RAWALPINDI / ISLAMABAD: The Federal Investigation Agency (FIA) arrested on Saturday an American citizen who had been blacklisted on espionage charges after he managed to clear immigration at the capital’s airport, the interior ministry said.

Matthew Craig Barrett, who was blacklisted and deported from Pakistan in 2011 on charges of spying on the country’s nuclear installations, “was able to clear the immigration process at the Islamabad airport due to negligence of immigration officials,” a statement issued by the ministry said. “A case has been registered against him for violating immigration laws,” it added.

According to the statement, Barrett managed to leave the airport after successfully clearing immigration. FIA officials arrested him from a guesthouse in the federal capital, it said.

Following his arrest, FIA investigators presented Barrett before a magistrate and obtained his three-day physical remand. They also arrested and obtained a three-day remand of Constable Ehtashamul Haq, one of the immigration officials responsible for allowing Barrett into the country.

However, the investigators told the magistrate that they had yet to arrest Sub-Inspector Raja Atif, the other immigration official involved in the incident. The magistrate directed the FIA officials to produce Barrett and Ehtasham in court on August 9.

Meanwhile, Interior Minister Chaudhry Nisar Ali Khan suspended several other immigration officials, including an FIA assistant director, for their negligence resulting in Barrett’s entry into the country. According to an interior ministry statement, action is also being taken against officials of Pakistan’s Consulate in Houston for issuing a visa to the blacklisted US citizen.

Nisar also asked top interior ministry officials to investigate whether Barrett was allowed into the country due to negligence or if there were any other factors behind the episode. He directed them to submit their inquiry report within the next 24 hours.

The minister also ordered the formation of a joint investigation team, comprising officials from the FIA, Intelligence Bureau and Inter-Services Intelligence, to probe the incident.