Beyond proper channels: Advertisers flay use of billboards to publicise rally

Beyond proper channels: Advertisers flay use of billboards to publicise rally 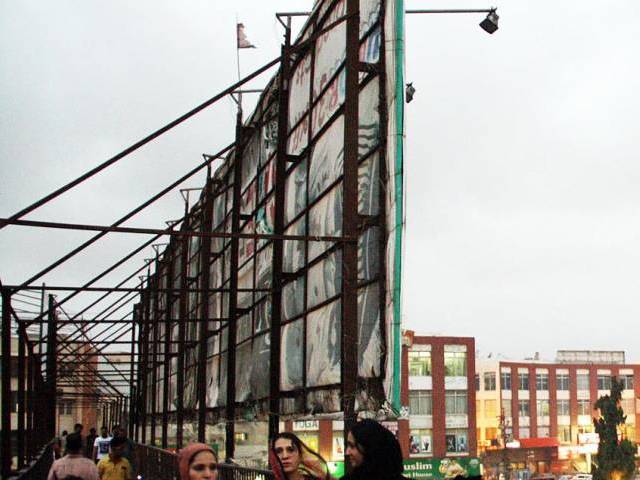 While talking to The Express Tribune, Ghani said the rally was arranged by the party and not by the government. PHOTO: ONLINE

PESHAWAR: A group of advertisers have accused Pakistan Tehreek-e-Insaf of unlawfully using billboards in various localities of the city to publicise its rally against corruption scheduled for Sunday (today).

However, Adviser to Chief Minister for Information Mushtaq Ghani has said the PTI-led government has no hand in installing these flexes and there is a strong likelihood that they have been placed by party workers and activists.

Managers of advertising agencies told The Express Tribune the party has allegedly removed the Panaflex sheets that had been displayed on these boards and put up a signs to publicise the rally.

The rally is scheduled to start today from Zakori Sharif Bridge near Ring Road. It will be led by PTI Chairperson Imran Khan and will conclude at Kherabad near Attock Bridge.

The manager of one of the advertising agencies in the city told The Express Tribune more than five billboards have been used by party officials.

“They did not even inform us before doing this,” he said. “They have simply removed the flex that was already displayed on it. We are paid by firms to put them up.”

According to the manager, he has a valid no-objection certificate (NoC) for the installation of billboards and has paid millions to Peshawar Development Authority (PDA) as a licence fee for this purpose.

“But now the billboards are covered with PTI’s flex,” he said. “This has irked firms whose advertisements were displayed on these boards.”

Another manager, who requested anonymity, said a total of 10 billboards have been used by the party to publicise the August 7 rally.

“When I approached the relevant authorities to ask about this, I was told to compromise on the matter,” he said. “I was told that they would be removed immediately after the rally ends.”

One of managers also alleged that the flexes, banners and other forms of publicity displayed in the city have been placed without obtaining an NoC from the authorities concerned.

PTI has also displayed hundreds of small banners on GT Road and Mufti Mehmood flyover. Insiders believe these banners have also been placed without following the proper channel.

An official told The Express Tribune any banner, flex or advertisement can only be placed on billboards once PDA gives permission after an NoC has been issued.

When contacted by The Express Tribune, Irfan Shehzad the protocol officer of PDA’s director general said he was unaware of the matter.

While talking to The Express Tribune, Ghani said the rally was arranged by the party and not by the government.

“The government was not involved in installing flexes to publicise the rally,” he said. “We have not given any permission to place any advertisements.”

The adviser added, “Party workers often install flexes in such situations. We can’t stop them from doing this.”

He added almost all parties, including JUI-F and ANP, install flexes in various localities ahead of such political events and no one has stopped them from doing it.

“It’s not a major issue and the flexes will be removed in a day [once the rally leaves Peshawar],” he added.

Meanwhile, City district nazim Muhammad Asim Khan was not available to comment on the matter despite repeated attempts to contact him.